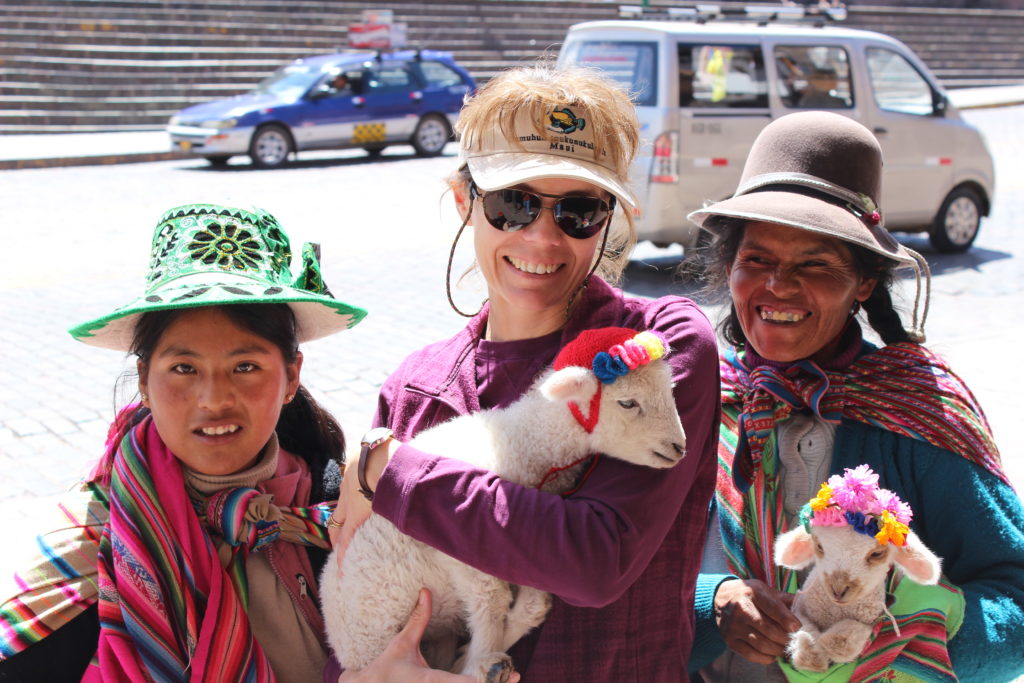 “It pays to keep an open mind, but not so open your brains fall out.”  ~  Carl Sagan
I must confess that a favorite television show of mine is “Ancient Aliens” on the History Channel. I’ve been known to watch hours of it at a time. Luckily my husband has an open mind on these subjects; it’s one of the reasons I married him. (That, and he has fabulous-looking feet. But I digress.) Common interests are important in relationships. So it was with great anticipation that I traveled last week with him to Peru. Our goal was Macchu Picchu and along the way other significant Inca sites. These are places which my favorite show suggests may have been built by aliens long ago while inhabiting Earth.
A side note—the original term Inka meant ruler in Quechua, the local dialect. It referred only to the ruling family. It was the Spanish who used the term Inca as an ethnic reference to encompass all subjects. Consequently it was the Inca Empire they encountered and conquered in the 1500’s.
First stop is Sacsayhuamán (yes, it sounds like “sexy woman”), overlooking the Andean city of Cusco, the former capital of the Inca Empire. Cusco sits at 11,150 feet so despite all that time spent at the Y working out, I found myself dizzy and nursing a low-grade headache as I huffed and puffed up the hillside to the ruins. At the height of its power in the 15th century, Sacsayhuamán was likely an important military fortress. It took thousands of men over fifty years to complete three ramparts of zigzag walls. Blocks of limestone—some as large as 361 tons—are fitted together without mortar so perfectly that even a piece of paper can’t be inserted. How this was accomplished is still up for debate, hence the popularity of fringe theories such as extraterrestrial technology.
Next stop are the ruins at Pisac. I will preface this first by stating that the Sacred Valley, through which you must travel to reach all these sites, is an idyllic and imposing place, buffeted by the Andes Mountains on both sides.

More than once the words paradise and shangri-la cross my mind. The citadel at Pisac sits high upon a hill (these Incas never built low) and controlled a route which connected the Inca Empire with the eastern jungles. It features all types of architecture—agricultural, hydraulic, military, residential, and religious.

The ubiquitous terraces are everywhere as well as an interesting cemetery on the side of a mountain. Bodies were lowered by rope to be placed inside caves.

Ollantaytambo is another important Inca site. Located at the confluence of two rivers (the Patakancha and the Urubamba), it was the location of a royal estate for the Inca Emperor Pachacuti. It is one of the finest archaeological complexes in Peru, containing religious, astronomical, administrative and urban areas. It’s here that we take the Inca Rail to the town of Aguas Calientes, the launching point for entry to Macchu Picchu. (Unless you’re hiking the Inca Trail—anywhere from a 2 to 5 day trek that begins outside Cusco. The Trail leads directly into Macchu Picchu.)
The next day we awake at 4am. Hotels begin serving breakfast at 4:30am. By 5:15am we walk to the bus station and already there are at least 500 people from all over the world in line. The buses drive much too fast on a switchback road to the entrance of Macchu Picchu but we arrive in one piece.

The first order of business is to climb Huanya Picchu, so we must hurry to the control station on the other side of Macchu Picchu. Only 400 people are allowed to climb this peak each day, famously visible in most Macchu Picchu photographs. The guidebook states that Huanya Picchu is a short, steep hike. That doesn’t even begin to describe it. It’s straight up the mountain. My vertigo presses in and I do my best to keep it at bay; I really don’t want to ruin this.

The reward is a breathtaking view of Macchu Picchu from atop Huanya Picchu. Also breathtaking are the surrounding peaks, the clouds rising and falling, the silver line of the river far below, and the lush foliage, courtesy of the just-ended rainy season. Walls and foundations sit atop Huanya Picchu. The Incas love of construction in high places brought them closer to their gods, notably the Sun God Inti.

The remainder of the day we spend exploring Macchu Picchu itself. It’s a most magical place—simple, elegant, and pristine. The current theory for its existence is that it was simply a winter getaway for Inca royalty. The Spanish never ransacked it because the Incas quickly abandoned it, moving up the valley to another location. Macchu Picchu was discovered in 1911 by Yale historian Hiram Bingham, although the locals had long known about it. In fact, it was a local boy that led Bingham to the area. We wander around, follow our tour guide for a while, enjoy the local llamas grazing, and absorb the wonderful energy present. 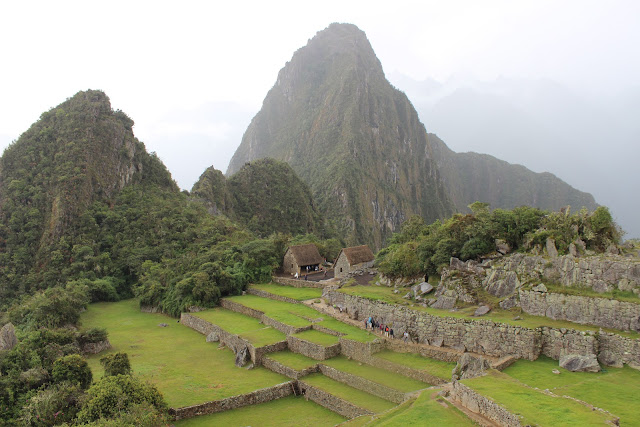 It’s here that our guide describes a technique used to cut the impossibly large pieces of stone. Several holes are bored into the rock and a piece of wood inserted. Water is added to the wood, thereby causing it to expand. Because there is quartz in the rock, it breaks along a plane. Polishing tools are used. My husband inspects some of the exposed pieces, finding notches that allowed two rocks to be locked together. The shape suggests that the builders used a margin of error in their measurements; the rocks didn’t have to match exactly. (Both my husband and I have backgrounds in engineering; all this means is that we’re curious about how things work.) Of course the polishing and rounding of the edges would have required proper tools, skills, and endless labor, but there was no doubt in my mind the Incas could have accomplished this. The alien theory simply doesn’t hold up under the most basic scrutiny. An open mind shouldn’t be an unhinged floodgate. But I’ll still enjoy my show and the fantastical extraterrestrial theories. I’m a fiction writer after all.
When it’s finally time to leave I’m reluctant. Macchu Picchu is special; you can’t help but feel it. For the first time, in crossing a destination from my bucket list, I add it again. This is a place to visit more than once. 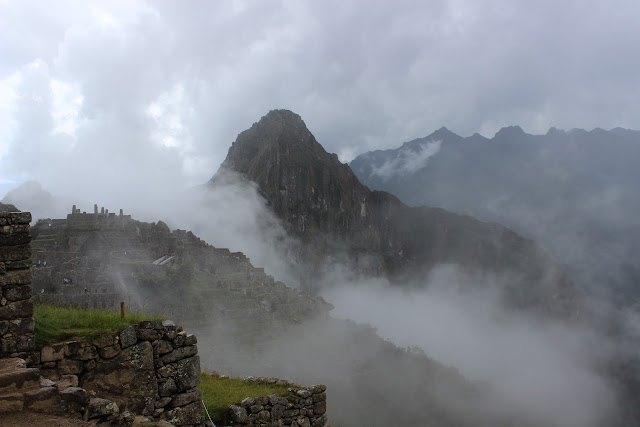 Thanks for posting your descriptions and photos, Kristy. I'm so excited to be heading to MP in October on a 10-day trek. I won't be hiking THE Inca Trail, but one of them. I'm definitely planning some extra acclimatization time at the beginning of the trip! From what you've described, it'll be necessary.

Have fun Sharry! Trekking will no doubt be amazing. One day I plan to return and do the Inca Trail. You'll have to post photos.

What an amazing story. Thanks for taking us through these lovely places and telling about how they got the way they are. Beautiful!

Thanks for stopping by June!

Reply
Cancel
Add Your Reply
This site uses cookies to customize your experience and provide web-based marketing. If you continue to use this site, you accept these terms.OkayRead more