A death mask is a likeness of a deceased person’s face following death. Typically constructed of wax or plaster, the impression is made directly from the corpse.

In many cultures, a death mask was used during the funeral and was usually buried with the body. The Egyptians made them as part of the mummification process, the most famous being King Tut’s golden mask. They believed the death mask allowed the deceased person’s spirit to find its body in the afterlife.

Some African tribes believed a death mask imbued a wearer with the power of the dead. But in the Middle Ages, the practice became less of a spiritual link and more a way of preserving the dead. Death masks weren’t buried with the deceased but instead were used in funeral ceremonies and later kept in libraries, museums, and universities.

THE LEGEND OF BAD MOON RISING by Carra Copelin

Sheriff Ben Hammond is finally over the woman who shattered his heart, but when Dinah Horne suddenly returns, can he ignore the passion still burning bright between them?

Trading horses for subways for two years seemed like a good idea to cowboy Chay Ridgway, but can city girl K.C. Daniels keep a rein on his country heart?

Archaeologist Audrey Driggs rolls off a mountain and lands at the feet of rugged cowboy Braden Delaney. Together, they’ll uncover a long-lost secret.

THE DRIFTER’S KISS by Devon McKay

Determined to take back what belongs to her, Addison Reed will do anything. Even trust a complete stranger.

HER MAN by Hildie McQueen

Deputy Mark Hunter falls for Eliza Brock during a murder investigation. Is it fate or bad luck, especially when she may be involved?

Widow Leticia Villarreal wants to establish a horse-racing stable and an old acquaintance John Clay Laidlaw offers to help. But can she trust him with her business and her heart?

After losing her fiancé and her New York City business, Harper Donovan returns to Arizona and meets cowboy Frank Flynn. Will his past and their differences extinguish the heat between them?

Braden sat across from Audrey, a fire flaming between them, holding the darkness at bay. They’d found a flat patch of land not far from the spot where they’d discovered Blue and had set up a small tent and supplies. Braden planned to sleep outside, and if Blue’s affectionate attentions were any indication, he’d have plenty of warmth from the mutt. Not that snuggling against Audrey didn’t have its merits, but he wondered if it was too soon to make a move.

She’d seen him cry like a baby after all. So much for giving an impression of strength and confidence. Damned if he hadn’t spilled his emotions out like a broken water pump. But in some ways losing his dad had broken him.

The horses and Stevie were picketed nearby munching on oats and grass, and Audrey had prepared peanut butter sandwiches for dinner. After the days’ events, Braden had eaten four.

“What did you want to tell me?” he prompted, running a hand along Blue’s back as the dog lay curled up against him.

Audrey crossed her legs and leaned forward, resting her elbows on her knees. Bundled in her brightly-colored fleece, the garment seemed to heighten the flush of her cheeks to a rosy glow. Although her hair was still pulled back from her face, strands had escaped and framed the soft contours of her cheeks, her eyes a deep blue-green in the flickering firelight.

Her only makeup was a sunburned nose and faint smudges of dirt, and he watched her like a lovesick puppy.

When had it happened? When had he fallen for her?

He hoped she wasn’t about to tell him she had a boyfriend.

“This isn’t the first time I’ve been here,” she said. “When I was nine, my dad took my sister and me for a weekend in the wilderness. I’m fairly certain this is where we were. When you mentioned seeing a family here years ago—I think it was us.”

That caught his attention. He laughed as he scratched behind Blue’s ear, the dog in canine bliss. “I remember you. It was early in the morning, and I was scouting around alone when I saw a dark-haired girl talking to herself.” He grinned. “Then she did a dance.”

Audrey twisted her mouth, appearing self-conscious. She took a deep breath. “Yeah, that was me. First, let me apologize for the fact that we were on Delaney land. I’m sure my dad didn’t realize we’d crossed the boundary between public and private lands.”

She chewed on her lower lip. “So, you should know that as a young child I was very sick.” 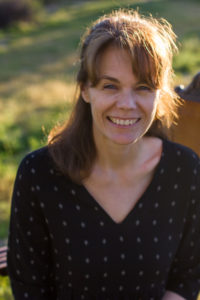 Kristy McCaffrey writes historical western romances set in the American southwest. She and her husband dwell in the Arizona desert with two chocolate labs named Ranger and Lily, and whichever of their four children that are in residence. Kristy believes life should be lived with curiosity, compassion, and gratitude, and one should never be far from the enthusiasm of a dog. She also likes sleeping-in, eating Mexican food, and doing yoga at home in her pajamas.

I have just read one of your books the wren. This is the only one so far but I will definitely be reading a lot more . Ian very pleased that I have found you and your work thank you I love western romance and. America

Thank you, Margaret!! So happy you enjoyed The Wren. Cheers!
Kristy