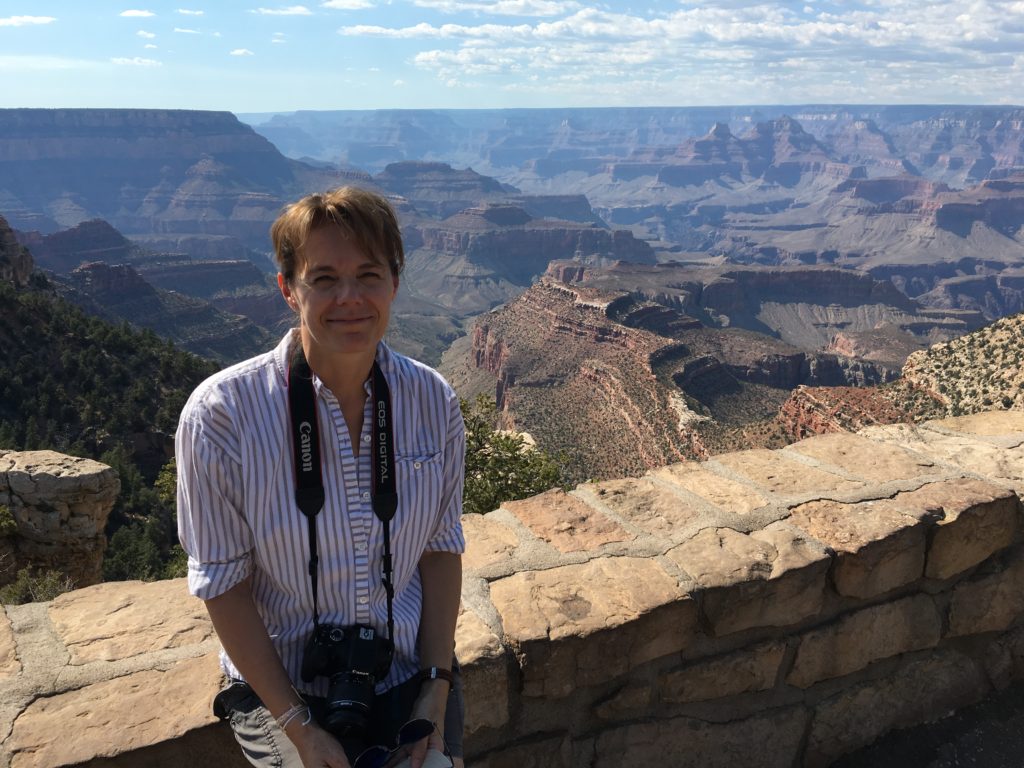 “All the descriptions written over the decades land with a dull thud next to the real thing. It’s because the Canyon is overwhelming. It is so personal, yet a beauty beyond us—a far world, unknown, and unknowable.” ~ Arizona author Leo W. Banks

Arizona’s number one tourist attraction is the Grand Canyon, and it should come as no surprise that the state’s nickname is “the Grand Canyon State.”

Grand Canyon National Park is known for its overwhelming size and its intricate and colorful landscape. Over time, the elements have scoured and carved the dramatically splendid Grand Canyon, known as one of the world’s seven natural wonders. The distance from the South Rim to the North Rim varies from half a mile to eighteen miles, and the canyon has a maximum depth of 6,000 feet. This great range in elevation allows for a variety of climate, flora, and fauna; of the seven life zones on the North American continent, four can be experienced within Grand Canyon.

The most prominent feature in the Grand Canyon, besides the deep gorges exposing millions of years of rock layers, lies at the bottom—the Colorado River. Named in 1776 by a Spanish missionary, Padre Francisco Tomás Garcés, it means “red” in Spanish, which is how the river would have appeared back then. Due to the construction of Glen Canyon Dam in northeastern Arizona in 1964, the river is now clear, clean, and cold.

The first documented expedition of the Colorado River through the Grand Canyon was accomplished by Major John Wesley Powell in 1869. Powell, a Civil War veteran with only one arm, and nine companions became the first men to journey 1,000 miles on the river, part of it through Grand Canyon. They braved rapids, heat, plummeting morale, and the loss of three men. Powell’s account of this expedition, Exploration of the Colorado River of the West and Its Tributaries, made him a national hero as well as brought the canyon to the attention of the country. The Paiutes called the plateau that the canyon cuts through ”Kaibab” or “Mountain Lying Down,” but it was Powell who first consistently used and published the name “Grand Canyon” in the 1870’s.

There are many options when visiting the Grand Canyon. The most popular location is the South Rim with many lodging choices, including campsites. These are booked one year in advance, so plan accordingly. (However, if you’re flexible you can sometimes find last-minute cancellations.) My favorite place is the El Tovar hotel, built in 1905. Be sure to grab lunch in the dining room (my favorite dish is the Traditional Navajo Taco). Learn more about where to stay here.

Activities while at the South Rim include hiking (the famed Bright Angel Trail begins here—if you’re in good physical condition then consider a day-hike to Indian Gardens, a halfway point to the bottom of the Canyon; overnighting inside the Canyon requires a permit), bike rides, and many lookout points (Desert Watchtower and Hermit’s Rest are my favorites). People often ask about the Skywalk, a 10-foot wide, horseshoe-shaped glass bridge that extends 70 feet over the rim of the Canyon. It’s not accessible from the South Rim, but lies farther west and is more easily reached from Las Vegas. A bit of trivia: the walkway is actually built over a side canyon and not Grand Canyon, although the view is still spectacular.

You can also visit the North Rim during the summer months (the roads are closed during the winter). It’s more remote and more difficult to reach, but there are also less crowds. And the different views of the Canyon make it worthwhile (the North Rim is at a higher elevation than the South Rim). The Grand Canyon Lodge offers a perfect place to stay, but remember to book 12 months in advance. You can find more info here.