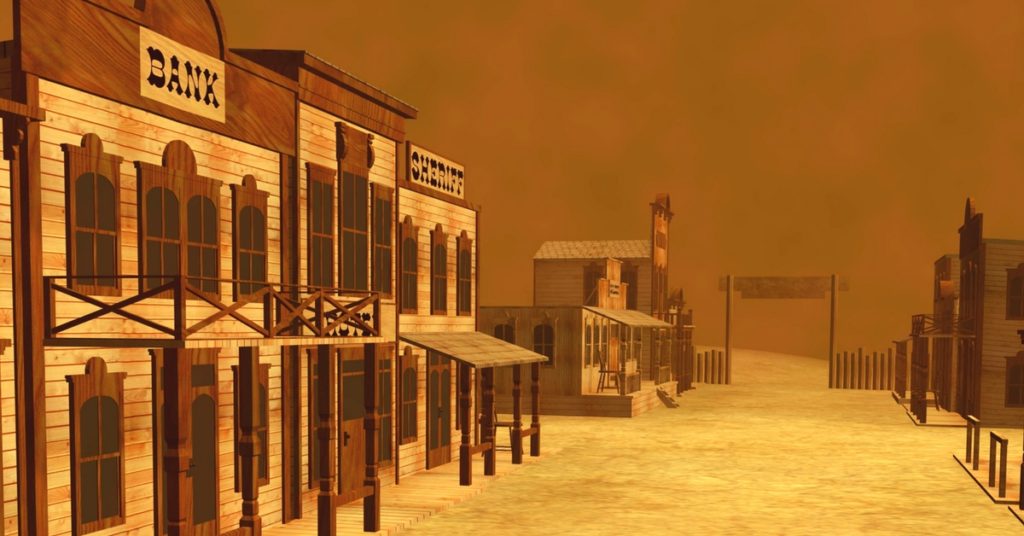 Blog-A-Book-Scene is a monthly themed blogging endeavor from a group of authors who love to share excerpts from their stories. Find us on Twitter with the hashtag #blogabookscene or #PrairieRosePub.

The theme for February is ALL YOU NEED IS LOVE. The following is an excerpt from my short novella A Westward Adventure, a sweet historical western romance.

Excerpt
In near darkness, Amelia washed Riggs in a tub of water behind Aunt Teddy's house. The dog was uncommonly good-mannered about it, panting in happiness and swinging his head to her every few seconds to plant a wet kiss on her face. Her dress was soaked as she scrubbed the dog's fur.

Aunt Teddy wasn't put out by the arrival of Riggs, of which Amelia was glad. Her aunt had told Ned that he needed a dog if he planned to live in the Parker house all by himself. Amelia couldn't help but feel that Teddy wasn't just talking about a pet, but about the fact that Ned needed a wife, too.

“What's that smell?” Ned's voice startled Amelia from her thoughts. “Are you drinking?”

“No.” She scooped water with a bucket and dumped it over Riggs. “I'm washing him with rum.”

“What on earth for?”

“It's wonderful for cleansing the hair–I've used it myself–and it can defer disease. Riggs was filthy, and I'd wager housing unwanted critters in his fur.”

“Smart, except he'll smell like he was just at Laramy's. I'll bet he needs a double-washing.”

“He's certainly dirty, but he's a happy fella.” She let Riggs lick her face. “And maybe just a bit into his cups.”

“Teddy had a bottle and said I could use it.”

“No. I'm almost done.” It's now or never. She shored up her courage, since she had no idea if Ned would be here come morning. “Ned, I wondered if I might ask you something.” She became breathless as her nerves kicked up a notch.

She cleared her throat and was glad for the darkness that blanketed them. From where he stood on the back porch, he couldn't see her hands shake. Setting down the bucket, she buried them into Riggs' wet, liquor-infused fur. “I wondered if, well, I wanted to ask you if, well…if you happened to be looking for companionship, then I'd be interested.”

“I beg pardon?” He sounded confused, but it was too late to turn back now.

“I like you, Ned. You're very handsome, and I'm impressed by your rugged occupation. I don't think I'm a bad-looking woman, and I'm seeking the company of a man.” She chanced a glance at him and even in the darkness she felt his stillness, his rapt attention on her words. She really had no idea how this was going.

“You want me to court you?” he asked.

“Well, that would be nice of you, but that's not necessary. I'm willing…to be your woman without it.”

He slowly took the steps and came to the tub. Riggs wagged his tail, sending water flying into Amelia's face. She stood, wiping her eyes, and hoped for a favorable reaction from Ned. Maybe he'd even kiss her. In hopeful anticipation, she waited.

“Amelia, I guess it's no secret what's between us. It's crept up rather fast, I'll admit. However, I never thought I'd say this, but I take offense by your assumption that all I'm good for is taking advantage of a woman, that I'd think nothing of ruining your reputation.”

“But you're a renegade, you're a man who doesn't stay put anywhere. You ride with the wind.”

He stood close enough that she could see his frown.

“I'll admit I haven't set down roots,” he said, “but, as I told you, I'm changing that with my purchase of the Parker place. And, one of these days, I'm lookin' to get married.”

“I don't want to get married.”

“Why in tarnation are you throwing yourself at me?” he asked.

“I'm not. I just thought to speed up the romance. Isn't that what men like you expect?”

“You seem to think you know a lot about me.” His voice held an edge of anger to it, fueling an equal indignation in herself. “Amelia, I think quite a lot of Teddy. I'd never dishonor her by taking up with her niece, treating you like nothing more than a lady at Laramy's.”

Riggs jumped out of the tub and shook, forcing Amelia close to Ned. His hands settled on her shoulders. The dog began running around, spraying water in all directions. Amelia moved toward the mutt, but Ned held her in place and leaned his face near. She forgot to breathe, and knew she was in over her head. A man like Ned would likely overwhelm her.

His mouth came to hers in a gentle, yet firm, kiss, surprising her with its sweet restraint. His warm hands left her shoulders and framed her face, and his mouth shifted as he tasted her, giving of himself while exploring her lips. She'd been kissed before, but never like this. Maybe it was the fresh mountain air and the pine trees, or the wide blue skies and simple life so close to Mother Earth, but Ned's gesture intoxicated her, evoking freedom and passion and an unnamed yearning. She'd felt it when she made it past the Mississippi River on her journey here, and it flooded her now.

She sank into him and rose on her toes, a hunger unleashed for more.

Ned broke the kiss. “Amelia, you're a beautiful woman, and you should know that I want you. But I won't bed you unless you marry me.”

“We hardly know each other.”

“And yet you propose we become lovers?”

“Isn't that what independent-minded women do?” He released her, and she immediately missed his touch.

“I wouldn't know about that,” he said. “Don't you want to marry one day? Surely you had opportunities back in New York.”

“Yes.” She attempted to compose herself. Riggs had run off. She needed to go after him. “But I don't want to be tied down. Aunt Teddy isn't. I plan to live like her.”

“It doesn't have to be, and I thought you didn't want to marry me.”

“I didn't think one kiss would change that, but it has.”

Amelia started to speak but couldn't think of a response because he was right. His kiss had altered something, but she didn't have the peace of mind to sort it all out at the moment.

“I'll get the dog. Then, starting tomorrow, I'm gonna court you, Amelia Mercer.”

“Because, if I don't, then you might throw yourself at some other fella.”

She let out a snort of amusement. “Then you haven't looked in a mirror lately.”

An amused gleam reached his eyes. He bent near again. “I think what we have here is love at first sight.”

“I'll remind you of this conversation on our fiftieth wedding anniversary.”

“You're a wild ruffian of the west. Men like you don't settle down.” Why was he acting like this? He was ruining the image of the hero in her novel.

“Maybe not. But then I laid eyes on you.”

“What does that have to do with it? Surely I'm not the first woman you've met.”

“No. That's true.” He gave a peck to her cheek and grinned at her as departed to find Riggs. “But I think you're gonna be the last.”

She watched him disappear into the dark and tried to fathom what had just occurred. The conversation had gone nothing like she'd planned. 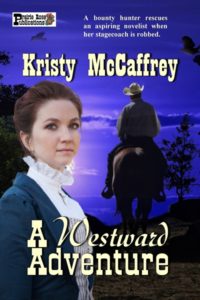 A Westward Adventure is available as a single-sell short e-novella for 99 cents.

The story is also included in the western romance anthology Cowboy Kisses (digital and print).

Both books can be found in the Kindle Unlimited program. 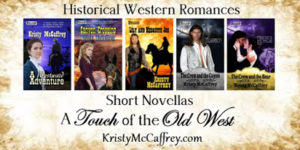 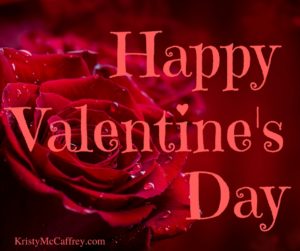