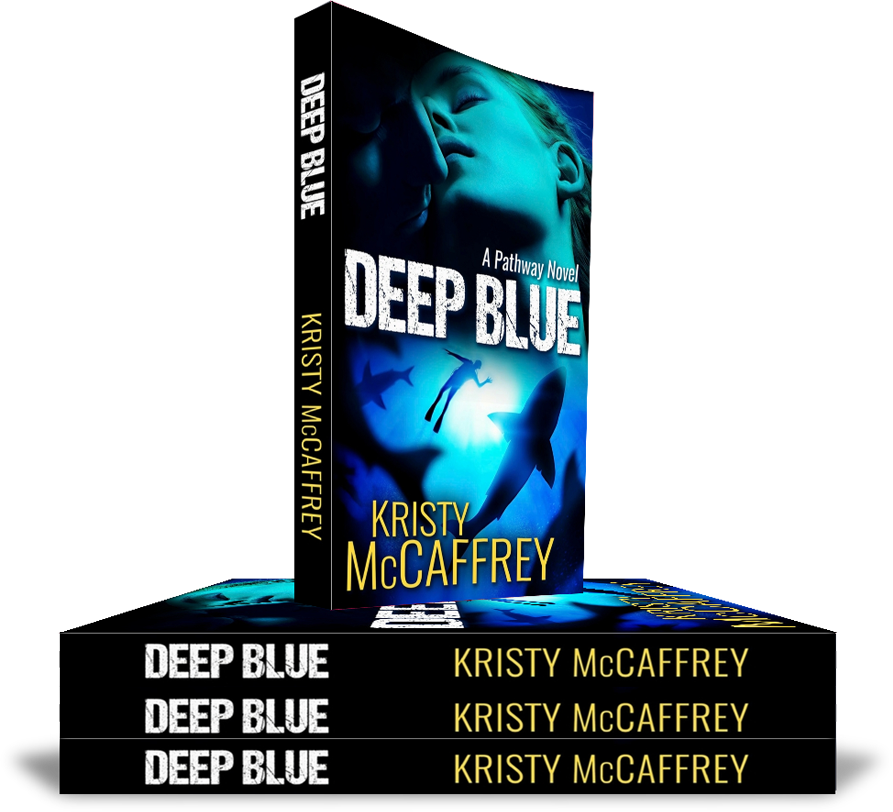 It's here!! I hope you'll join me on an ocean adventure with a determined shark researcher, a hunky underwater filmmaker, and a bevy of great white sharks. 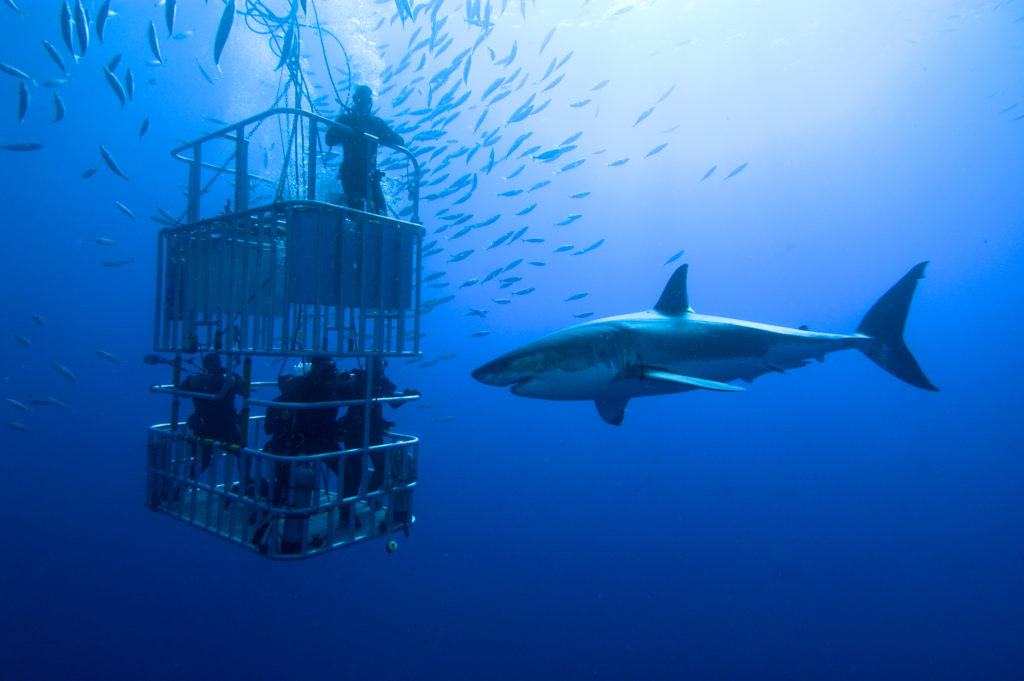 In the deep blue ocean lives an ancient predator…

Dr. Grace Mann knows great white sharks. As the daughter of an obsessed shark researcher based at the Farallon Islands, Grace spent her childhood in the company of these elegant and massive creatures. When a photo of her freediving with a great white goes viral, the institute where she works seeks to capitalize on her new-found fame by producing a documentary about her work.

Underwater filmmaker Alec Galloway admires Dr. Mann and jumps at the opportunity to create a film showcasing the pretty biologist. As he heads to Guadalupe Island in Baja California Sur for a three-week expedition, it’s clear that his fan-boy crush on Grace is turning into something more serious. But even more pressing—Grace’s passionate focus on the sharks just might get her killed. 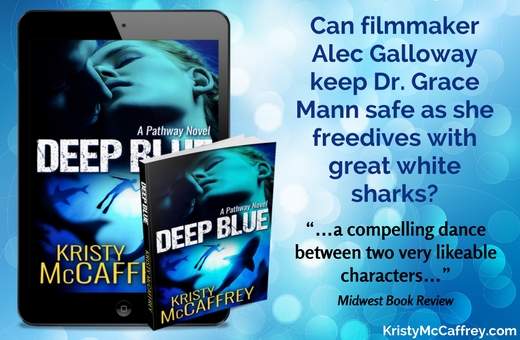 How about another excerpt?

The waitress reappeared with two more tall beakers of beer. She also set a basket of wings on the table. “It’s from John.”

“Thank you,” Grace said, a hungry glint in her gaze as she looked at the food.

The waitress grabbed the previous glasses, now empty, then left them alone once again. Grace unrolled her napkin and removed the silverware tucked inside, then pushed the edge of the white cloth into the neckline of her dress. She grabbed a wing, dipped it into the accompanying cup of ranch dressing, and ate like a ravenous teenage boy.

“Why didn’t you say something?” Alec said.

“What do you mean?” Barbecue sauce smeared her upper lip.

“This isn’t a date, Galloway.”

No, it wasn’t. “Got it,” he said, annoyed by the sting of her comment.

Apparently with Dr. Mann it was two steps forward and one step back. He snatched a wing since she was already on her second one. At the rate she was going, he’d be lucky to get another.

“So?” he prompted, biting into the spicy meat. “The scar?”

“Right. It was a great white.”

“But you said you only freedived that one time in the presence of a white.”

She dropped a carcass of bones back into the basket and licked her fingers. “It happened when I was a kid. My dad spent several months each year stationed at the Farallon Islands researching the whites.” She removed the napkin at her neck, wiped her mouth, then her hands. “Once Chloe and I were old enough, he’d bring us along for a week or two at a time.” She laughed. “My mom hated it. She didn’t think it was safe. My dad and I agreed never to tell her how bad it was when I got bit, but Chloe eventually spilled it. After that, Mom threatened to never let us go again, but Dad eventually wore her down.”

Alec stared at her, slack-jawed. The Farallones—a collection of granite peaks jutting from the Pacific Ocean and known as the Devil’s Teeth—were just a hop, skip, and a jump from San Francisco Bay. The water was undeniably cold year-round, not to mention murky, and the weather was hell most of the time. “You got in the water around the Farallones?” he uttered in stunned disbelief. “When you were a kid?”

She’d finally wiped most of the wing sauce from her appendages, although a faint smear still rested on her cheek. When she looked at him again, she paused, noticing his shock. “It wasn’t on purpose. I was out with Dad on the small outboard he used to visit shark attacks on the seals when the love of his life bumped us. I was perched on the gunwale. It was entirely bad luck.”

“I fell in, and a big beautiful sister sideswiped me, ripping off my lifejacket like it was a piece of tissue. Her teeth grazed my neck enough to slice it open, but thankfully it wasn’t a deep wound.”

“It’s what the researchers call the large females, the twenty-footers. There’s only ever been a handful of them documented over the years. They generally travel alone and always dominate the feeding grounds.” Her eyes went glassy. “There’s nothing like them anywhere on earth. They’re a sight to behold.”

“Twelve. Dad yanked me out before Bonnie came around for another pass.”

Where had he heard that name before?

Recognition surfaced. “I think I know your shark.”

Overcome with an urge to touch her, Alec grabbed his napkin and wiped the sauce from her face. She immediately brushed her fingers across both cheeks, attempting to find anything else left behind.

“Well?” she prompted, her complexion flush in a rosy glow.

But he knew it wasn’t for him. If he’d learned anything about Grace Mann in the last day and a half, it was that it wasn’t just her father who’d had a love affair with great whites—his daughter was head over heels as well.

“I dived the Farallones once, and only once, two years ago. Even now, it still makes my heart skip a beat and my palms sweat.” 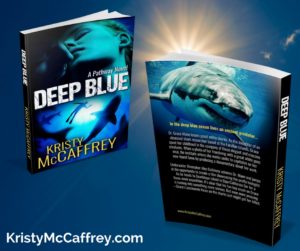 And I've got a special treat for my newsletter subscribers – an exclusive novella not available anywhere else.

When shark researcher Grace Mann accompanies her boyfriend, underwater filmmaker Alec Galloway, to Western Australia for a commercial shoot with great whites, she envisions relaxing days in the sun and smoldering nights between the sheets. But as Alec’s mood becomes increasingly distant, Grace worries that maybe the chemistry they shared—so effortless in the beginning—was starting to fizzle. Is his reticence related to her, or something else? And can she find a way to help him get the footage he needs before his behavior places his life in danger?

Current newsletter subscribers will receive the download code this week. Keep an eye on your inbox. If you're not a subscriber, sign-up here.