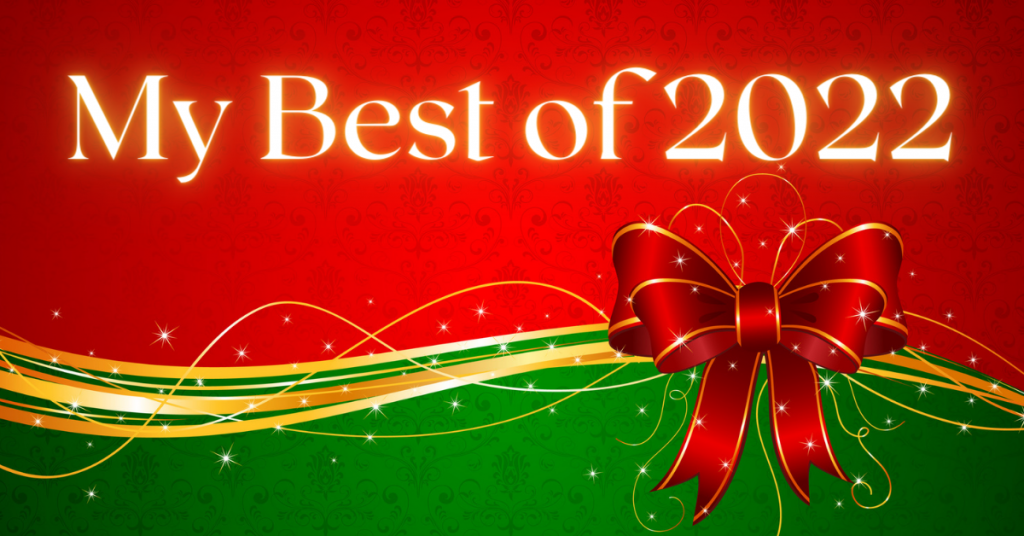 It was a hard year. My father-in-law passed away in May. He was a man of charisma and charity, tough yet always there for his family. My beloved chocolate lab, Lily, passed in July after fifteen years. I won’t lie – this one wrecked me most of all. I’d raised her from a puppy, and she was embedded in my soul more than I’d realized until she was gone. But there were bright spots—my younger son got engaged and we’re looking forward to a 2023 wedding. And my first grandchild blessed us with an early appearance—little Scarlett was born five weeks premature, but she’s doing well, getting big and doing all the baby things, which is mostly to make you fall hopelessly in love with her.

Live in the Moment

It sounds cliché but when my sweet Lily was in hospice the last six months of her life (she started having seizures and slowly lost her ability to walk), my husband and I cared for her around the clock. We took turns sleeping on a mattress in the living room so she was never alone. Every two to three hours we would carry her outside to do her business. She often couldn’t sleep and would pace and pant, or despite medication, she would seize for hours. It was a physically draining time. But I stayed in the moment, taking care with my thoughts (keeping a positive mindset and not wallowing in despair). I wasn’t naïve, I knew what was coming, but it allowed me to fully love her with no regrets. I changed my writing schedule so that my daily goals were very small (write 500 words or edit one page) because my brain was fuzzy from lack of sleep most days. I managed to finish a novel while not beating myself up for not being more accomplished. I learned the immense power we have in the NOW. It gave me the strength to keep going each day, to give Lily her best life until the very end.

I drink it with oat milk, no water, and three pumps of brown sugar syrup (or apple brown sugar syrup during the Christmas holiday). This sugary-caffeine drink has been my indulgence this year, a pick-me-up when I feel low.

A year ago, we went to the pound and brought home the saddest dog there. We wanted a companion for Lily, and Jeb needed a chance. He’s an American Bulldog, a breed I wasn’t familiar with, so I got to work educating myself. He’s been a handful! In addition to chronic health issues (environmental allergies that require lifelong medication – it’s so bad his toes periodically swell – and a low thyroid that now treated has given him more energy), he’s the most reactive dog I’ve ever had. While he was good with Lily (she always welcomed any new dog into her home with open paws), he hasn’t been good with any other pet. He grabbed the tail of my vet’s office cat and yanked it to the ground, attacked my daughter’s puppy after we accidentally left a door open (Dipsy was ok, thankfully, with only an abscess on his cheek), fought and tried to kill a large rattlesnake (Jeb was bitten in the face), bit my mom’s purse two different times when she entered my house, and well, you get the picture. We’ve been working on training him but he’s very emotional and it’s clear he wasn’t properly socialized as a puppy. He’s always leashed and in control for his evening walks (which he loves) but having people just “stop by” doesn’t work. He’s very loving, but he needs strong boundaries. We won’t give up on him!

Both shows had complex and emotional stories, and the acting was top-notch. Get your tissues handy.

An entertaining big cinema experience – just the thing after a long pandemic.

Lost Hits of the ’80s on iHeart Radio

My high school and college years, so … nostalgia.

Burgers and tacos but the best part is the tv screens that showcase surfing on a loop. It makes you feel like you’re at the beach.

I learned that using essential oils on the back of my arms can get rid of those pesky dermatitis bumps. My favorite is Leahlani’s Pua Lei Oil. It smells so good.

I only recently learned of this amazing device that can break up the knots in your muscles. I use it on my neck and my feet (I developed plantar fasciitis this year). They can be quite expensive, but my husband found one at Lowe’s (generic name: muscle massager) for $40 and it works great.

I can’t pick a favorite!

As many of you know, I’m an author so choosing a best book of the year is like favoring one of my children over the other. Impossible! So here’s a “best of” list of what I read in 2022, all excellent.

The Seven Husbands of Evelyn Hugo by Taylor Jenkins Reid

The Backside of Hades by Ann Charles and Sam Lucky

A Lady’s Formula For Love by Elizabeth Everett

Just Haven’t Met You Yet by Sophie Cousens

Book of Night by Holly Black

It Happened One Summer by Tessa Bailey

The Murderbot Diaries by Martha Wells

Love On The Brain by Ali Hazelwood

The Six Deaths of the Saint by Alix E. Harrow

Wishing you all a blessed holiday and a Happy 2023!!