Kristy with her dog, Lily. She's a senior girl of 15 now. 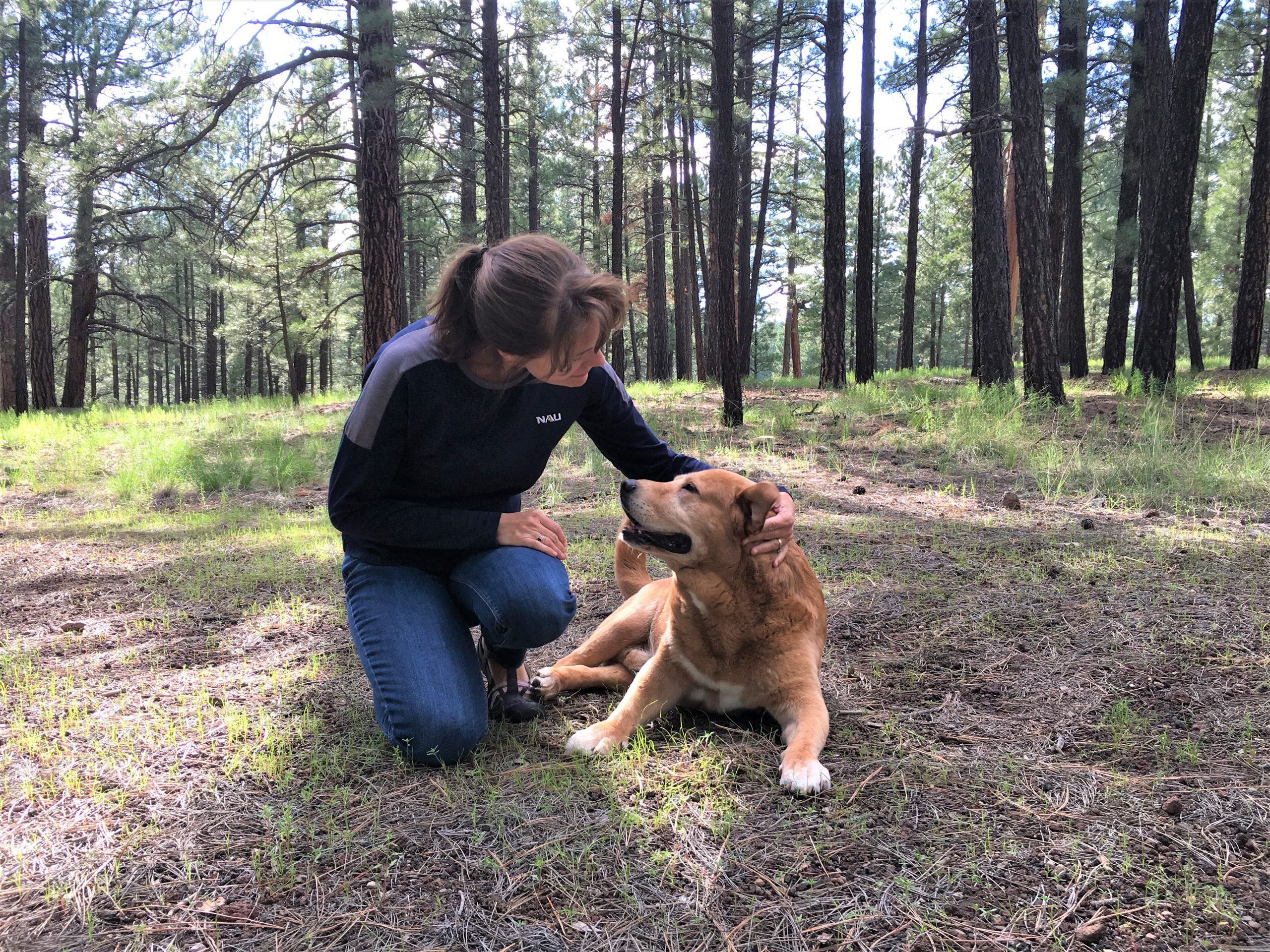 Kristy and her rescue dog, Marley. He passed away in May 2021 from cancer. She was blessed to have him for 3-1/2 years. 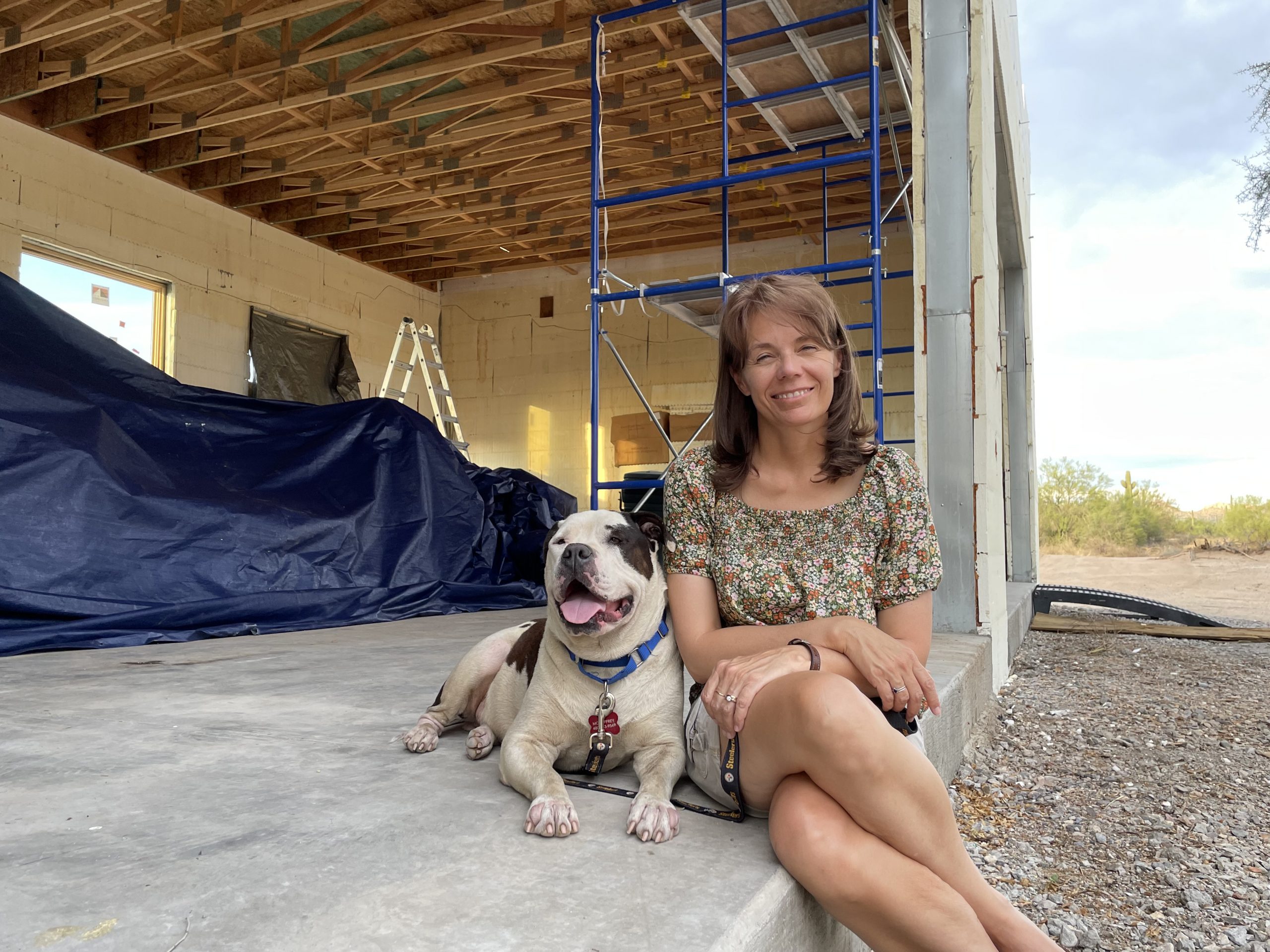 Kristy and her family adopted Jeb in July 2021. He's an American Bulldog and about 3 years old. Soon after he proved his loyalty when he fought a rattlesnake in the front yard. Thankfully, he's fully recovered. Kristy ... not so much. 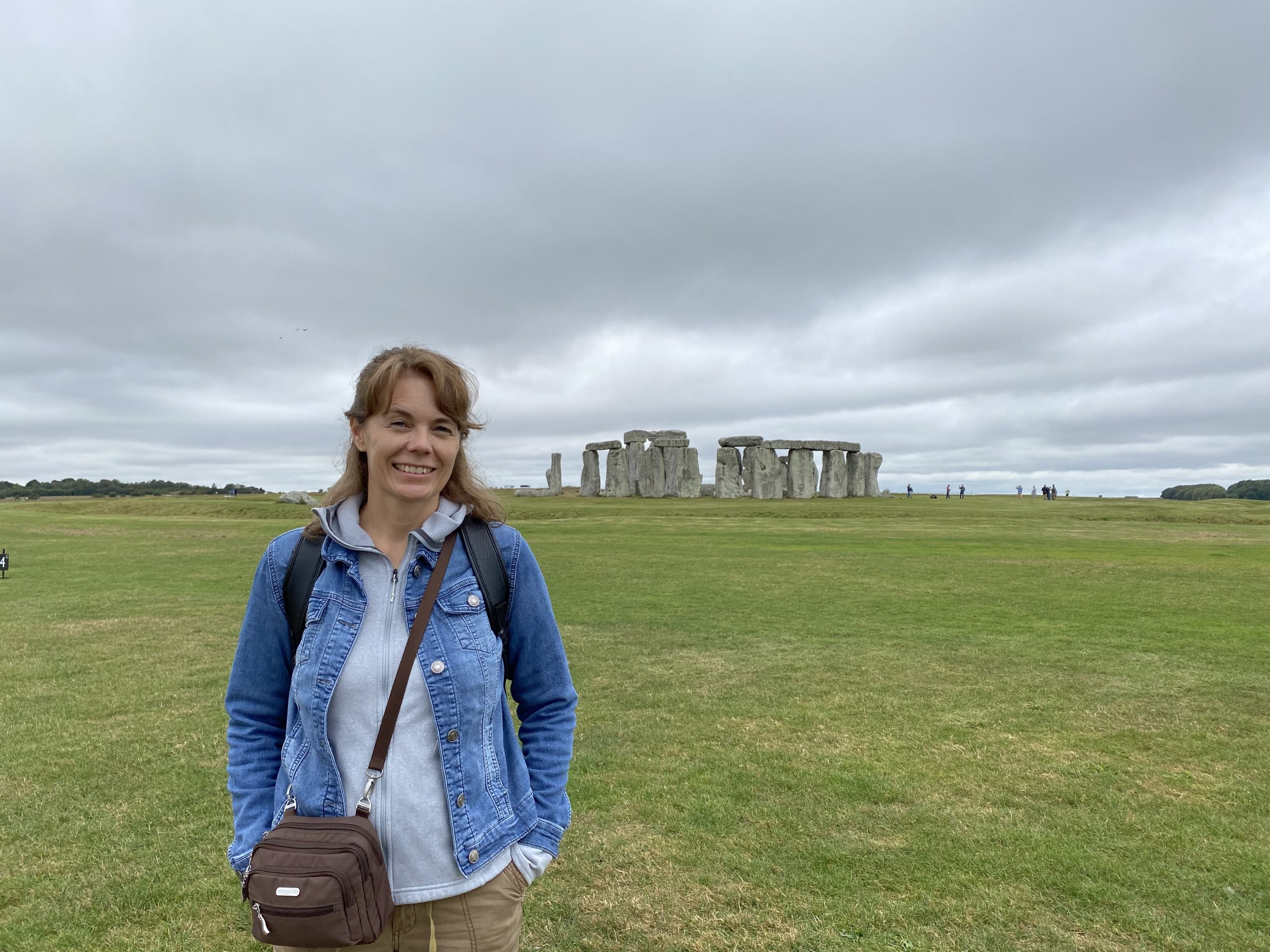 Monkey Jungle in the Dominican Republic. 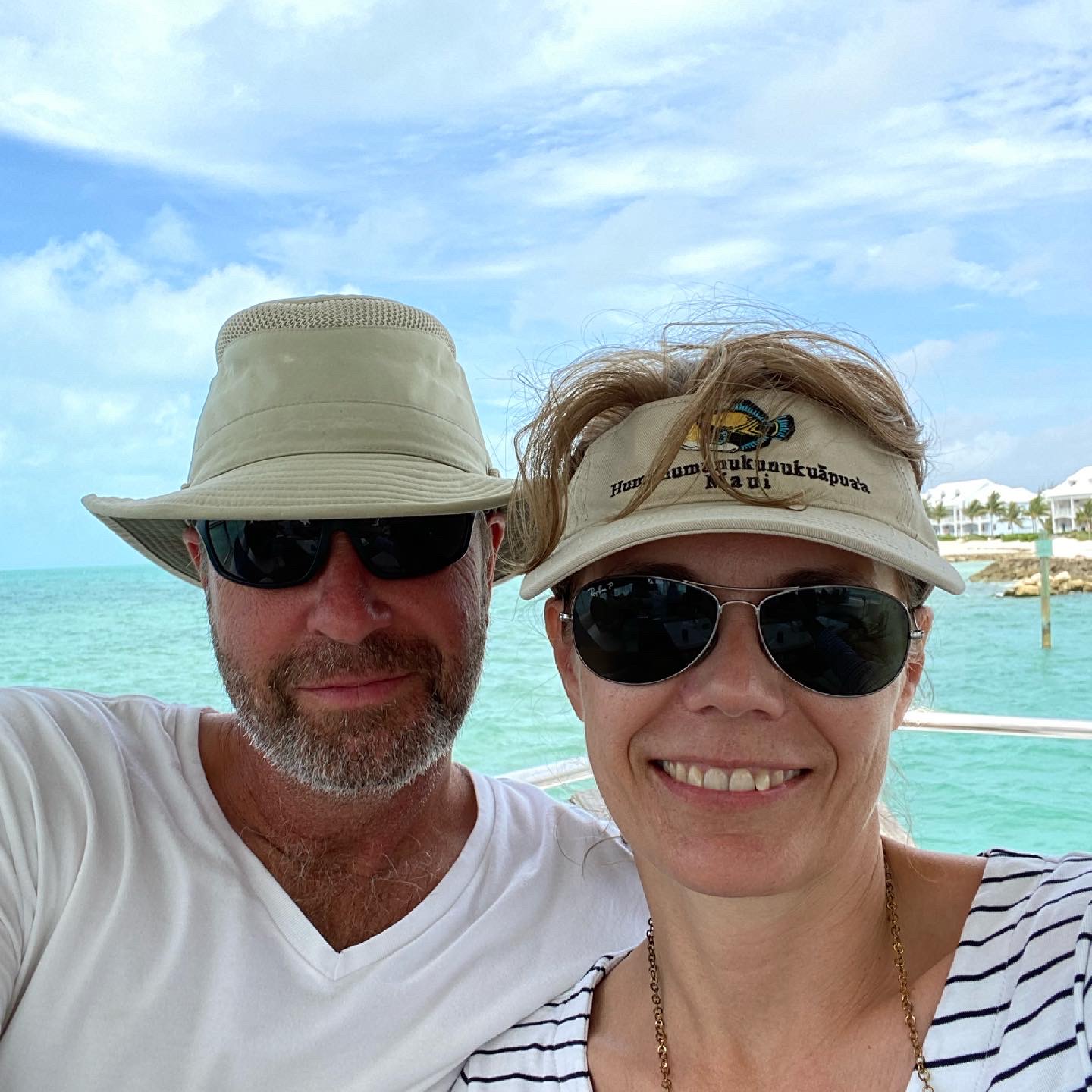 Kristy and her husband, Kevin. 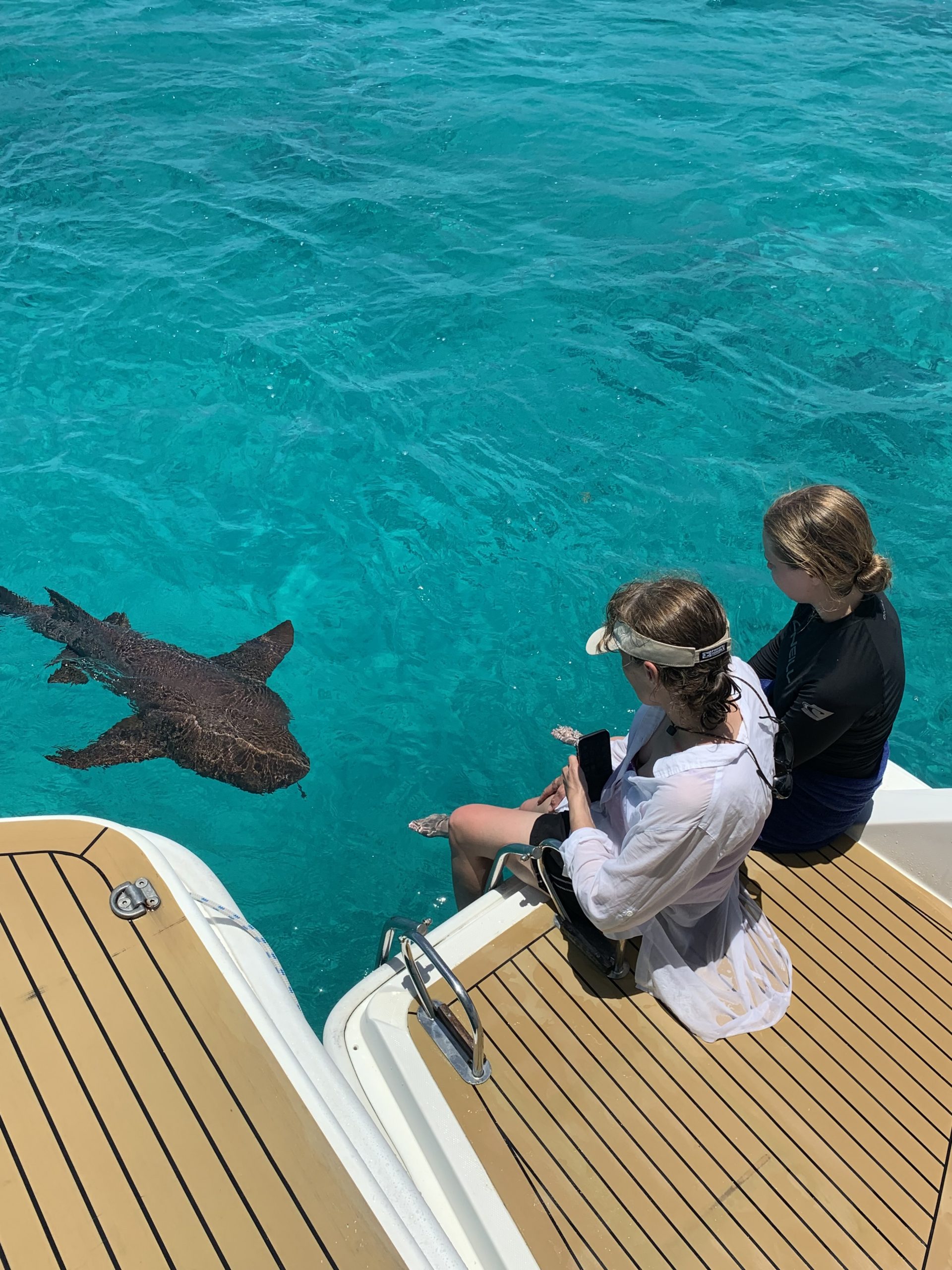 Kristy and her daughter meeting a friendly nurse shark near Compass Cay, Exuma Islands, The Bahamas. He visited for nearly an hour. The Great Wall of China at Badaling. The Wave, located at the Arizona/Utah border. A mysterious stone sphere in the Osa Peninsula, Costa Rica. When I was a little girl growing up in Scottsdale, Arizona, I would frequently narrate my life to myself inside my head. I enjoyed this shift into a third person point-of-view. Perhaps it was the feeling of control it instilled, but it also helped my young mind process the daily grind of my life. I also had an overwhelming compulsion to write. I have boxes of diaries from my youth as evidence.

My mother was a voracious reader, so I spent my teenage years snatching books from her nightstand. During that time, her tastes ran to science fiction and fantasy. I had a steady diet of Anne McCaffrey (no relation), Marion Zimmer Bradley, Piers Anthony, and Roger Zelazney. I was also deeply enamored of King Arthur. I fell in love with Jane Austen’s Pride and Prejudice, and was fascinated by the twists and turns of Wuthering Heights, but I really didn’t read romances until I was a young married woman living a few thousand miles from home. My husband and I didn’t have much money back then, so I would walk to the nearby library and read whatever bodice-rippers happened to be on the shelf. Despite some of the cheesy covers, I quickly fell in love with the rich storylines and well-drawn characters. It became obvious, later, that these were the kind of stories I wanted to write.

I studied engineering in college. There are no engineers in my family (my dad is an accountant and my mom a glass artist/teacher) but I was drawn to it for two reasons. One, I liked math and my high school calculus teacher always spoke so excitedly about the relationship between math and the world around us. Two, I wanted to make my dad proud by being an independent woman with a good job. Starting salaries for engineers aren’t too shabby. Funny thing is, I’ve never worked as an engineer except for a few summer internships at Motorola. My most intense engineering endeavor was my thesis while earning a Master’s in Mechanical Engineering at the University of Pittsburgh. I designed a computer model that tracked heat damage inflicted when removing orthodontic brackets from dinosaur teeth. No, not really dinosaur teeth. One of my coefficients was incorrect and I inadvertently designed giant teeth instead of small, human ones. When I discovered my error, I was quite embarrassed and processed it by sobbing and eating an entire box of chocolate doughnuts. The debacle cost me an extra semester at school, but I did finally graduate.

When my husband and I began our family, we both agreed that it was important to have a parent at home, and I jumped at the chance to spend all my days with my children. It was a real blessing. However, I soon felt the urge to stretch myself, to work my brain a bit, and it wasn’t engineering I desired to do but writing. So, with four children under the age of five underfoot, I penned my first manuscript. Suffice it to say, there were many stops and starts, and many a rewrite, but that story eventually became The Wren, which was published in 2003.

I’ve written a few more books since, and have learned, and continue to learn, the art of writing, the way my own process unfolds, and the fun and hair-pulling aspects of marketing and promotion. I credit the unwavering support of my husband for giving me the opportunity to pursue my dream, because it took me ten years to support my writing career.

And now, a few random and fun facts about me:

My favorite movie of all time is Star Wars. I’ve seen it well over 60 times.

When I was young, I wanted to be (in no particular order): a theoretical physicist, a meteorologist, or a Dallas Cowboy cheerleader.

My dream job after college was to work for Lucasfilm and do sound design for movies (but I opted for children instead).

In college, I was President of the local chapter of the Society of Women Engineers at Arizona State University.

During college, I fought a bull while in Mexico for Spring Break. (I survived unscathed, but scared out of my wits. The girl after me didn’t fare so well and had to be taken to the hospital with a broken ankle.)

I met my husband in German class at ASU when I was 18.

I’m not very fluent in German. (Maybe because I was distracted by that cute boy sitting behind me?)

As a child, I had over 20 pen pals from all over the world. I’m still in touch with one—we’re Facebook friends.

I bummed through Europe with my boyfriend (who later became my husband). We slept on boat decks and train station floors, lugging packs from England to Belgium to Germany to Italy and finally to the Greek Isles. Do this while you’re young.

I’m still gripped with wanderlust and have also traveled to Argentina, Peru, China, Turkey, Scotland, Ireland, and my favorite trip to date—interacting with gray whales in Baja, Mexico.

What’s on my bucket list? Swimming with humpbacks in either the Dominican Republic or Tonga; great white shark cage-diving at Guadalupe Island (Baja, Mexico); visiting an obscure collection of islands in the Central Pacific called Kiribati; Kathmandu; and gorgeous and remote Mongolia.

My overall dream? Grow old with my husband, try my best to release my children into the world (it’s hard to disengage those mommy tentacles), and keep writing the next damned book that won’t let me alone.

Kristy is a member of Romance Writers of America and Novelists Inc.