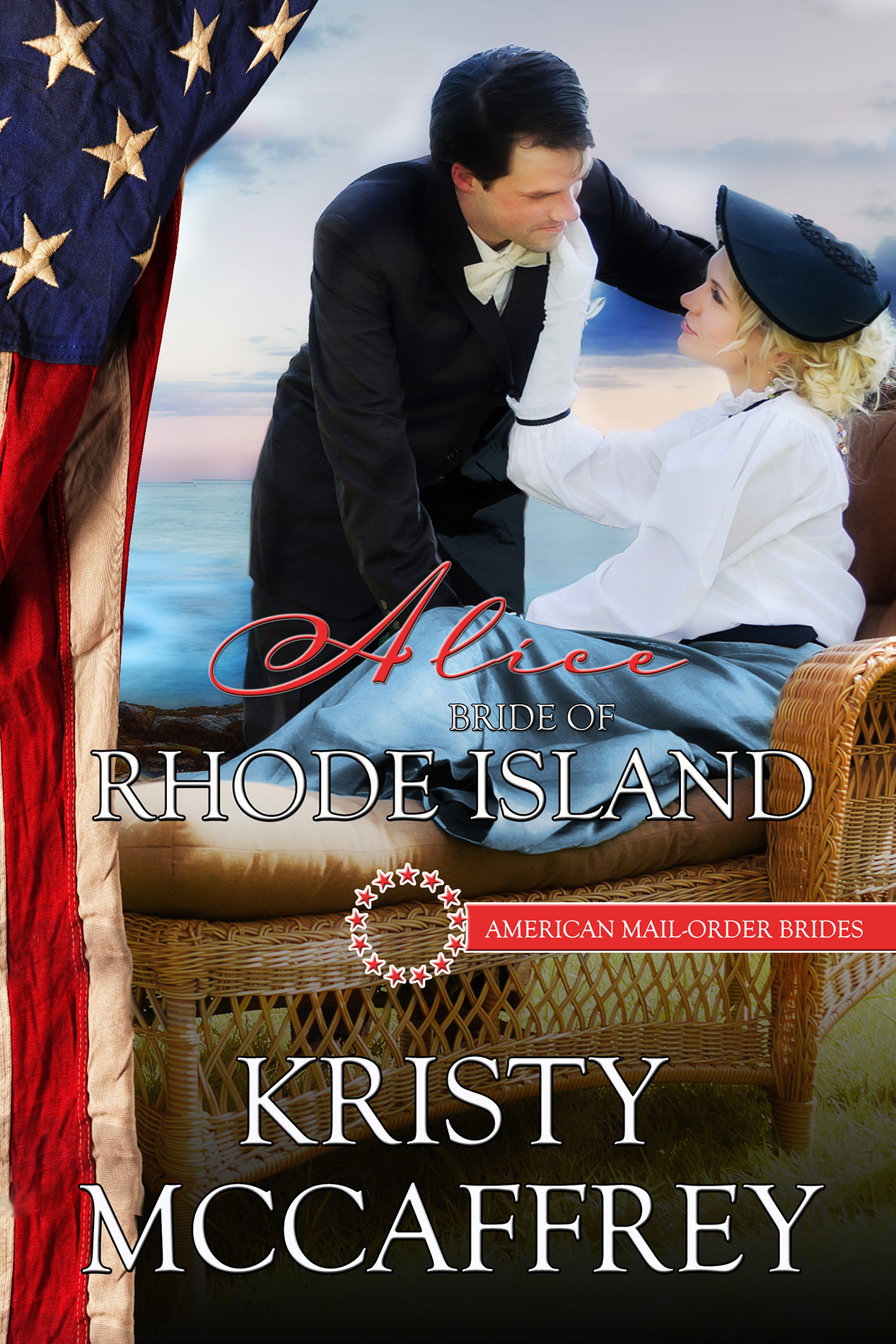 Fleeing her stepfather and an arranged marriage in Newport, Alice Endicott finds work as a seamstress at the Brown Textile Mill near Boston. When a devastating fire destroys the factory, she and all the girls face dire unemployment circumstances. But hope arrives when their manager, Roberta McDaniel, shares the Grooms’ Gazette with them. Each woman will choose a husband and become a mail-order bride. As Alice’s friends—Lottie, Leora, Judith, Beth, Lessie and Josie—embrace the idea, she too becomes caught up in the excitement of a grand new adventure.

When fisherman Frank Martel contacts her, Alice can’t pass up the opportunity to return to Rhode Island despite her stepfather’s presence. Upon arriving at the train station in Tiverton, however, Frank neglects to meet her.

James Martel is shocked to find a woman at the rail depot claiming to be his brother’s fiancée. Even more surprising is her connection to a man who ruined James’ father years before. When Frank confesses that he can no longer wed Alice, James steps forward to fill the role since the beautiful young woman holds the key to avenging the Martel name.

Can Alice convince her new husband that their marriage is worth saving once she discovers his subterfuge? And will James learn that love is more important than revenge?

Learn about all the American Mail-Order Brides books here.

“Alice and James are an outstanding couple that leave you with a variety of emotions…I was unable to put the book down…I love Kristy McCaffrey's writing and this is no exception. Anyone reading this story will not be disappointed.” ~ Nancy C., reader, 5 stars

“The story was good and made you stand behind this wonderful woman and cheer her on…I liked how the author described the state and what business went on…fishing!”~ Shirl D., reader, 5 stars

“As a native Rhode Islander, and more than a little familiar with Newport, I've often found myself wondering what life in days gone by might have been like. From Thames Street, Truro Street to Bowen's Wharf, Kristy helped me see the Newport of times past. The description of RI chowder and Johnny cakes didn't hurt.” ~ Alisa B., reader, 5 stars

Alice Endicott exited the train, wound tight with anticipation. Carrying a satchel in each hand filled with all of her possessions, she paused and scanned the Tiverton rail station. Her betrothed, Frank Martel, had promised to meet her.

A handful of passengers disembarked onto the narrow wooden platform and swarmed around her as they filed into the modest two-story building. The unpleasant odor of burning coal hit her, and she coughed, but an even more disagreeable stench of rotting fish soon replaced it. The rail stop sat on the water—she’d overheard another gentleman say it was the Sakonnet River—so she supposed there was much fishing up and down the banks, hence the overwhelming foul aroma. Setting her bags down, Alice retrieved a kerchief from her belongings and placed it against her nose. She hoped that waiting on the platform would aid Mr. Martel in finding her.

Tiverton wasn’t a large town. She’d had to travel from Boston to Providence, then to Fall River—only eight miles away, but in Massachusetts nonetheless—until finally reaching her new home. Despite the lengthy journey, the Old Colony Railroad had been prompt; a quick glance at a pocket watch that had once belonged to her papa showed that she was right on time.

Eye contact with several passing gentleman proved unfruitful. None of them approached, although two gave her a pleasant nod of greeting. Grasping her bags and holding her breath against the God-awful smell, she slowly walked into the station building.

In the now nearly vacant lobby, Alice sat on a bench and waited. At the far end of the room a clerk busied himself behind a counter, helping an occasional customer. Across from Alice, a boy, likely not older than fifteen, organized his supplies of shoe shine equipment after the recent rush of customers. The train remained outside and would surely be departing soon to cross the Stone Bridge to Portsmouth, then on to Newport.

Alice watched the boy for a while. She brushed the wrinkles from her clothes…stared at the dust motes drifting through a shaft of late-afternoon light…smoothed back a loose strand of hair. After what seemed like hours, she checked her watch again. It had only been fifty-five minutes, but disappointment lodged like a weight at the base of her lungs.

Mr. Martel must have been detained.

She didn’t have much money, but it seemed her only option was to make her way to him.

Checking that her bonnet was snug, she tucked the kerchief into the cuff of her moss green walking dress in order to keep it handy. The snug wool garment had kept her warm on the chilly journey. It was the nicest outfit she owned; she’d wanted to look her best when she met Frank. When she’d fled her stepfather two years prior, she’d left most of her fine gowns and day dresses behind.

She stood, fetched her bags, and moved out of the train station. A striking woman in a cocoa-colored ensemble that matched her brown hair passed by, and Alice’s eye caught on the bonnet situated high upon the woman’s head. Atop it sat a replica of a bird’s nest. A pang of envy sliced into Alice over the woman’s stature and easy confidence.

One day perhaps I will have such certainty in myself.

“Miss, could you spare a penny?”

Alice turned to find a young boy, probably nine or ten years old, in ragged clothes staring earnestly up at her.

“You poor thing,” Alice said. “Where do you live? Where are your parents?”

Alice set down her bags and considered the coins in her reticule dangling from her wrist. She really didn’t have much to spare. It had been over a month since the fire at the factory where she’d worked, and she’d had no income since. Marriage wasn’t just some romantic notion for her; she was in desperate need of food, lodging, and a warm hearth.

Miss McDaniel had been endlessly supportive to Alice and the other girls left nearly destitute after the fire, and it was she who’d helped to arrange the marriages. Alice had never desired to wed, especially after her forced betrothal to William Evans by her stepfather, but she’d quickly come to realize that her notions were too fanciful. Her friends had all embraced becoming mail-order brides, finally convincing Alice to do the same.

Even in the darkest of hours, Alice had been determined to never return to her stepfather, despite the financial respite that would’ve brought.

The boy grabbed her hand and began tugging for her to follow.

Alice attempted to stop him. “No. I can’t go with you. I must get to Martel Fishing Enterprises.”

“Please come, miss,” the boy pleaded. “I want to show you something.”

Alice turned to see a tall, imposing man approach. His stern expression made her wonder if he was the father. The boy—Toby—released her hand. Alice stepped back to let the gentleman handle the child.

“Run along now,” he said. “You know better than to harass the passengers.”

“Is he your son?” Alice asked.

The man’s gaze shifted to her, and she stared into his blue-green eyes. A black hat covered ebony hair, and his broad frame filled a double-breasted sable frock coat in fine form.

He shook his head. “No. He means to drag you around the corner where you’ll likely be robbed.” He looked back to the boy. “Isn’t that right, Toby?”

Alice gasped. “That’s terrible. A boy this young shouldn’t be living a life of crime.”

“Well, be that as it may, life is what it is sometimes.”

Alice frowned at the callousness of the man.

“Are you new to town?” he asked. “May I help you find your way somewhere?”

For a moment, Alice thought to keep her predicament private. But, truthfully, she could use help. “I was to meet a man by the name of Frank Martel, but it would seem he’s been detained.”

When she mentioned her betrothed, the man’s expression changed from stern to surprise.

“Do you know him?” asked Alice.

The man’s countenance closed down again. “He’s my brother.”

“Oh, lovely.” Alice extended her gloved hand. “It’s a pleasure to meet you, Mr. Martel. Are you James or Theo?”

He frowned. “James.” He took her hand then released it.

“Would it be too much trouble to ask you for transportation to Frank’s home or business?”

A bad feeling settled over Alice. “Did he not mention me?”

Mr. Martel gave a slight shake of his head.

“Are you certain?” she persisted. “I’ve come all the way from Massachusetts, although I was born and raised in Newport.”

Mr. Martel’s gaze honed in on her. “What’s your name?”

She couldn’t be positive, but the barest hint of a smile tugged at the man’s mouth. He was undeniably handsome. She swiftly shook off that wayward thought. Perhaps Frank would favor the good looks of his brother. If that was true, then she might be fortunate to have strong, healthy children.

“Well, I do believe it’s my duty to escort you, Miss Endicott.” He retrieved her two satchels.

“My thanks, sir.” Abruptly she turned back to the boy; Toby hadn’t completely departed. She opened her reticule, dug out a five-cent piece, and handed it to the boy. “Try to stay out of trouble.” The lad grabbed the coin and ran away.

Still watching the youth, she retreated. When she spun around, she bumped into the hard wall that was Mr. Martel’s chest and jumped back.

“Why did you give him money?” he asked.

“Everyone deserves help in this life.”

“Then perhaps you should offer him a job and a place to live.”

“You have a far kinder heart than I do, Miss Endicott.” He strode away from her, and she had to walk quickly to keep pace with him.

She hoped Frank wasn’t as serious and unfeeling as his brother.