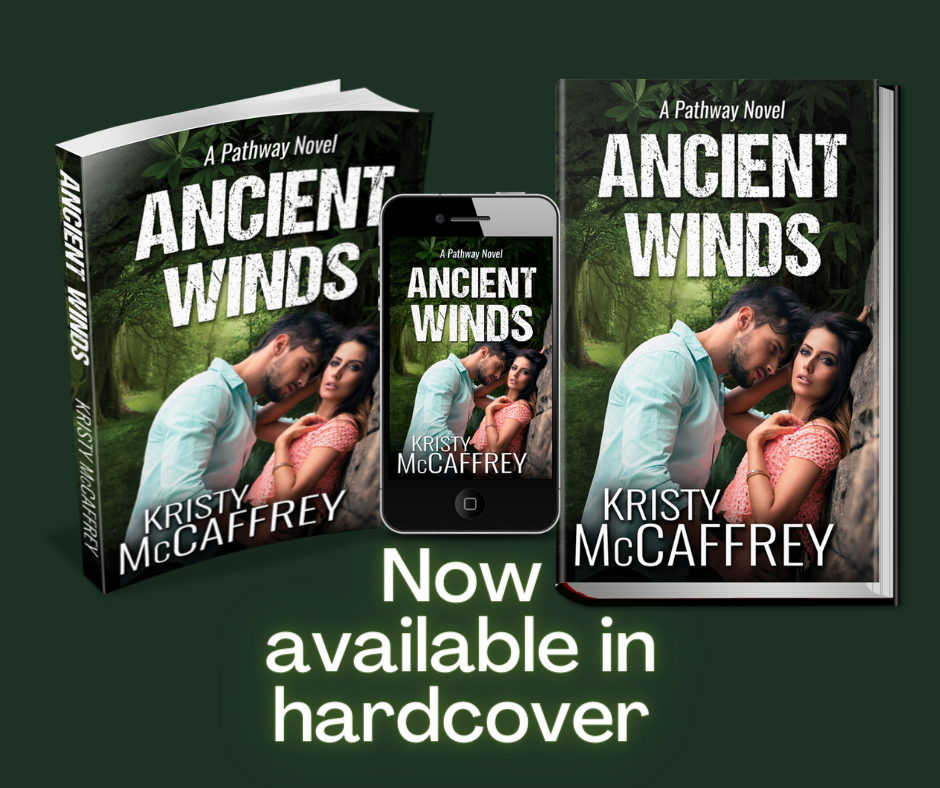 Ancient Winds Is Now In Hardcover

I'm so excited to share that I have my first book in hardcover!

Ancient Winds is now available in digital, paperback, and hardback.

Archaeologist Brynn Galloway partners with sexy mercenary physicist Dr. Tristan Magee to track down a rare Sumerian artifact, but in the Bolivian jungle there are no barriers … least of all between them.

Brynn couldn’t sleep and found Tristan sitting by a small fire near the main building. With elbows on knees, he was hunched forward, his gaze intent on the flames as shadows ebbed and flowed across the angles of his face. He sported a few days’ growth of whiskers and his dark hair was curling along the collar of his shirt. The wilderness was slowly consuming them, making them wild in the process, or maybe it was simply the jungle stripping away societal barriers and laying them bare. Brynn suspected, however, that Magee had never paid much attention to such niceties.

“Communing with aliens?” she asked, keeping her voice low so as not to disturb the others who might be nearby. Tristan had been right—privacy was in short supply.

The glint in Tristan’s gaze conveyed annoyed amusement. And maybe something else. The tug in her belly was immediate, and she all but lifted her nose to catch his scent. For a moment she let herself revel in everything male that was Magee: muscle, strength, and possibly the biggest aphrodisiac for her—irreverence.

He motioned for her to sit as he said, “Well, if you consider talking to Dimar interacting with something not of this world, then the answer is yes.”

She took a seat, leaving the one between them empty. Wouldn’t want him to get the wrong idea.

“Sometimes I have trouble sleeping in the jungle,” he said.

“Is that a sleeping aid?” she asked as he took a sip from his canteen.

He replaced the lid. “Nah. Just water. Can you play backgammon, Galloway?”

“Yes. I used to play with my grandfather.”

He disappeared, and then returned with a mini version of the game. He unfolded the board and proceeded to set it up on the empty chair between them.

“Why backgammon?” she asked, helping him organize the pieces in the glow of the firelight.

“It was my dad’s favorite. Did you know it’s one of the oldest known board games?”

“I do. They’ve found evidence of it in Mesopotamia. Maybe it was a gift from their alien benefactors.”

“The dice were made from human bones, so no alien intervention likely.”

“You do know your artifacts.”

“I try.” He handed her a die, his hand brushing hers. “Need a refresher on the rules?”