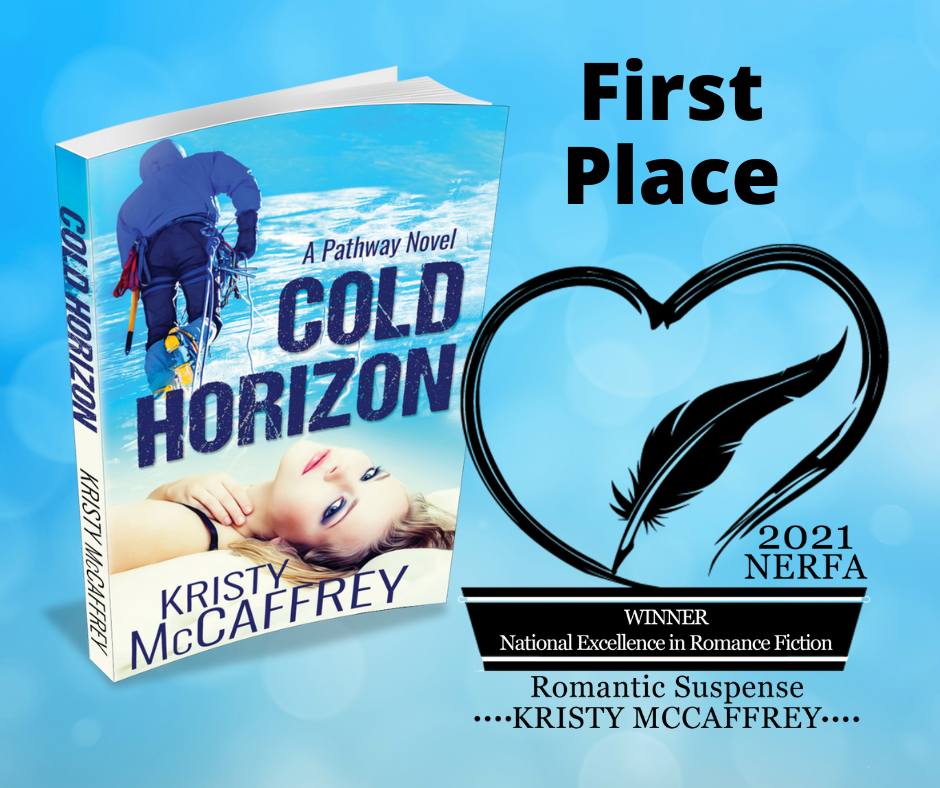 I'm so excited to share that COLD HORIZON has won First Place in Romantic Suspense for the National Excellence in Romance Fiction!! This award is sponsored by the First Coast Chapter of Romance Writers of America, based out of Jacksonville, Florida.

This book was a challenge to write, so I'm absolutely thrilled it's resonated with readers. Lindsey Coulson is a favorite heroine for me and has proven to be an inspiration to others with her fortitude and tenacity. And Ty Galloway's work ethic and obvious devotion to Lindsey was a pleasure to write.

If you haven't read it yet, I hope you'll give it a try.

“All the 8000-meter peaks have been conquered with winter ascents now, except for K2,” Ty said, seeking to change the subject. “As usual, she’s holding out. Here’s another interesting fact—K2 is the site of the most famous belay in mountaineering history.”

“I’m hoping to get a photo as we pass the spot,” Packer said. “I’m gonna put it on my social media with hashtag ‘BadAssBelay.’”

“Why is it so famous?” Brynn asked.

“One man held the force of six falling men,” Ditch replied. “It was in 1953 and the summit of K2 had yet to be reached by anyone. The expedition—only the fifth one here—wouldn’t reach it either. It was an American team led by a man named Charles Houston, an excellent and well-respected climber. They had made it quite high on the mountain when one of their teammates, a man named Art Gilkey, for whom the memorial here is named, became very ill. They had to bring him down in a makeshift stretcher, which is a very dangerous thing to do. At one point, each man slipped in fast succession, becoming entangled in the ropes. A young climber named Pete Schoening was at the end, and he held them all, saving their lives. It was an incredible feat, really. Unfortunately, later, they anchored Gilkey to the mountain while they set up a tent, and he disappeared, likely swept away by an avalanche.”

Brynn took a sip of coffee from her mug. “Don’t all of you find the death in these places unsettling?”

“You can’t let it get to you,” David said. “On Everest, some of the dead are still where they died. You walk right by them.”

“One of the markers to the summit is Green Boots,” Ditch said. “I think he was an Indian climber.”

“They just freeze and are left there?” Captain Juneid asked, having remained silent during the meal.

“It’s too dangerous to move them,” Ditch replied. “It sounds unfeeling, but if they’re dead, they don’t need to get down the mountain.”

“Sometimes climbers try to bring bodies down,” Ty said quietly, glancing at Lindsey. Alison’s body was somewhere on K2. “But most of the time it’s all they can do to get themselves down safely.”

“Well, if I freeze my ass to K2, I give everyone here the green light to leave me,” Packer said. “I’d be happy to spend eternity here. Then everyone can pass me by, referring to the Packer marker.”

Ditch smirked. “You mean they’d be saying ‘The summit is just beyond the asshole blocking the route.’”

Packer let out a whoop. “I’ve been called worse.”

Brynn’s face took on an expression of concern. “I know climbing is addictive—I surfed for years, so I get the mentality—but really, why do you all do it?”

Ditch finished off his coffee. “Which I don’t think you’ve ever done.”

“I think I’ll rope with Lindsey.”

Packer released an exaggerated sigh. “God, I hate it when there’s a better climber on the team than me. I have to work so much harder. Wait a minute, why do you get to rope up with the lady?”

Lindsey looked at Brynn. “Are you sure you don’t want to take up climbing?”

“Maybe I will. But I can see why you always climbed with your sister.”

“You girls are too picky,” Packer said.

“Just watch yourself,” Ty cut in. “There’ll be no messing around with my sister.”

“No.” Lindsey answered at the same time as Ty.

He immediately regretted the force of his opposition, the hair rising on the back of his neck. The protectiveness for his sister didn’t surprise him, but hell if he wanted anyone laying claim to Lindsey.

Shit. So much for keeping his feelings under the radar.