The Songbird is on Pre-Order 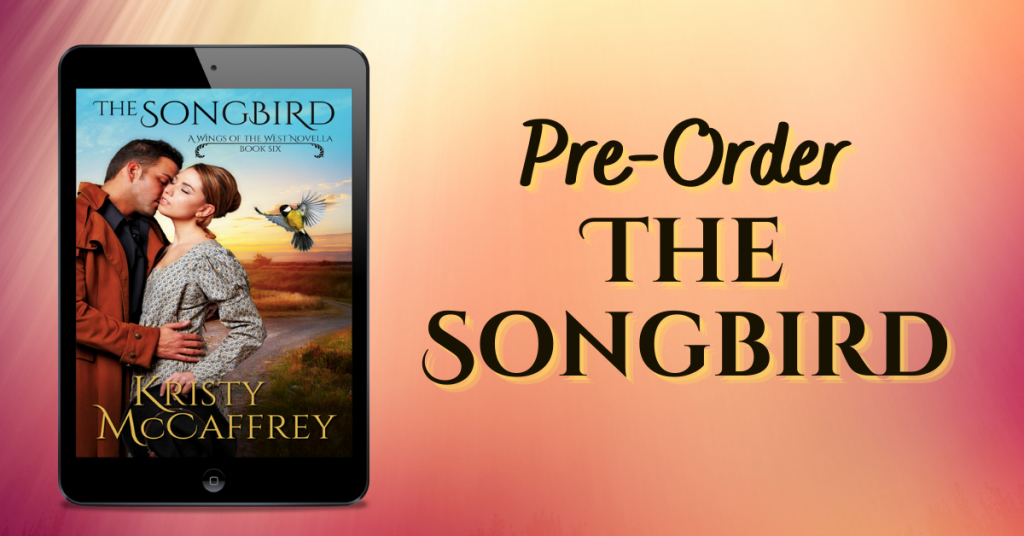 I'm so excited to announce a new story in the Wings of the West series. I wrote this novella for the fans, who have shown so much love for the series over the years. If you’ve ever wondered what life was like for Matt and Molly after THE WREN, then you won’t want to miss this fun read. (Although they do appear in the short story ECHO OF THE PLAINS, which takes place after THE SONGBIRD.)

This novella serves two purposes – a reunion with fave characters from the series, as well as acting as a bridge to the next set of Wings novels, which will star the daughters of Matt and Molly, and Logan and Claire (from THE DOVE). Keep reading to learn the name of the next novel!

The release date for THE SONGBIRD is December 28, 2021, which also happens to be my 30th wedding anniversary.

Join characters from the Wings of the West series in this novella set fifteen years after THE WREN.

A fair in Denton, Texas, draws folks from far and wide, and Matt and Molly Ryan have come to close a horse deal while also enjoying a bit of rest and relaxation. It’s a family affair with Matt’s brother, Logan, and his wife, Claire, joining them, as well as Nathan and Emma Blackmore, and Cale and Tess Walker.

Meet the daughters of the second generation—Katie and Josie Ryan, belonging to Matt and Molly; and Anna, Sarah, and Sophie Ryan, Logan and Claire’s girls. Ranging in age from eleven to fourteen, they attempt to help a boy falsely accused of theft, but in doing so they uncover a deeper secret. And the connection may lead back to Molly’s time with the Kwahadi Comanche when she was a child.

Look for each of the girls to be featured in a future novel.

You can pre-order your copy now!! (Google Play is coming and the story will also be available in print.)

Add it to your Goodreads shelf and be notified on release day.

The cover reveal for THE STARLING will be in December for my newsletter subscribers. Sign up here if you haven't already. I'd love to see you there!

An excerpt from THE SONGBIRD

The look on Cale’s face told Matt there was more news.

A smile came and went on Cale’s face. “I fear you’re gonna hate this rumor more than the previous one. McCabe wants to have supper with Molly.”

In disbelief, Matt said, “Does he want to court my wife? I damn well have something to say about that.”

“McCabe’s a prick. That’s no secret. But I think it has more to do with her time with the Comanche.”

That was something Matt preferred to keep private, if only to protect her. He and Molly had been married for fifteen years, but he still couldn’t abide her past being the subject of gossip. However, in the years since she’d had their children, she had spoken on occasion with them of her abduction when she was nine years old, along with the ensuing years she had lived with the Comanche before being rescued by an old miner named Elijah, the very man for whom they had named their son. She was even teaching Katie to speak Comanche.

“It’s up to Molly whether she wants to discuss her past with him,” Matt said. “But I’ll be there if she does.”

“When does the race start?” Cale asked. “Which one is it again?”

“The three-eighths-mile dash,” Logan said. “And it begins in an hour. The purse is up to $50. I hear the betting is favoring me.”

“That’s horseshit,” Nathan said. “If anything, it’s that pony over there getting all the interest.” He nodded toward a corral where an impressive mare pranced back and forth. The man who was watching the animal triggered recognition.

“Is that Bill Harner?” Matt asked.

Nathan looked closer. “I’ll be damned. I think it is.”

Logan pulled on his leather gloves. “Who’s that?”

“Back in ’75, he was on the Rangers with us,” Nathan replied, referring to his and Matt’s time with the Texas Rangers. “But he was just a youngster. That was right before I got Matt away from Cerillo. After that, I don’t know what happened to Bill.”

“We need to head over to the starting line,” Nathan said, his gaze encompassing Logan. “Wouldn’t want our winning boy to miss his moment of glory.”

“You’ll be eating my dust, Blackmore.”

“Good luck,” Matt said as the two of them departed. Matt headed in the opposite direction, but then stopped and turned back to Cale. “You coming? If McCabe starts gabbing like a hen about Molly, I’ll need your backup.”

Cale cocked an eyebrow. “You want me to hold your hand?”

“Like hell. I might need you to pull me off him if he pisses me off. Molly won’t take kindly to me sitting in a jail cell for disorderly conduct. She’s expecting me for supper.”

“Don’t worry. Sheriff Mars owes me a favor. You wouldn’t be in jail for long.”

Add Your Reply
how to write a summary and response essay example.