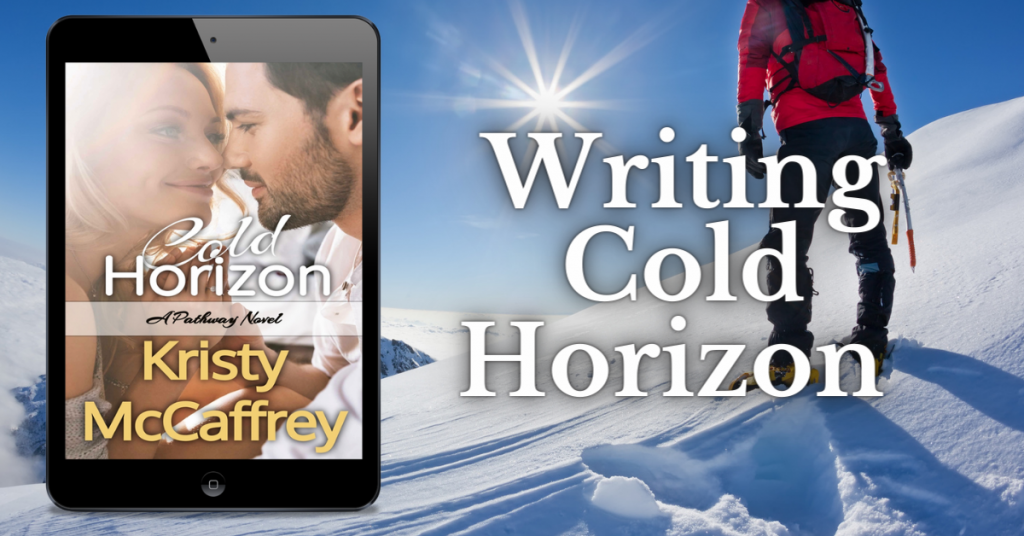 I’m not a climber, but I’ve always been fascinated by mountain climbing and have followed the careers of many mountaineers. I've always wanted to write a book about it. When I decided to get serious about COLD HORIZON, I read dozens of memoirs by climbers, as well as educating myself about how these types of expeditions were organized. Another great resource were blogs where climbers posted real-time as they tackled K2. While Mt. Everest is the tallest mountain in the world, I was more interested in K2, number two. It’s not located in the Himalaya but in the Karakoram. Climbers must enter through Pakistan, and the trek to base camp is a perilous ten-day hike with little infrastructure. K2 is a technically more difficult mountain than Everest, and it’s more dangerous.

I watched a lot of documentaries too, but one of my favorite films is Vertical Limit (released in 2000) starring Chris O’Donnell, Robyn Tunney, the late Bill Paxton, and Scott Glenn. It gets a lot about K2 wrong, but it’s highly entertaining and perfect popcorn fare.

The heroine, Lindsey Coulson, grew up with a mountaineering father. Unfortunately, he dies while on an expedition when she’s young, but she and her older sister, Alison, become climbers in their teens nevertheless. Together they tackle some of the biggest mountains in the world and begin to make a name for themselves. Then Alison dies at K2—the first expedition that Lindsey had skipped—and in her grief, Lindsey stops climbing. But now she’s ready to get back at it, and she knows she must go to K2, so she approaches Tyler Galloway and asks if she can join his team.

Tyler Galloway has grown up with adventurous parents who instilled a love of the outdoors and extreme sports in all three of their children. (His siblings star in the other two Pathway books, DEEP BLUE and ANCIENT WINDS.) He has an appreciation for the natural world and supplements his income by writing about it, but he is also restless at heart and likes pushing himself. He admires Lindsey, even has a bit of a crush on her, but he’s a strong leader who considers the needs of the team over the individual.

The other members of the team are David Shaw, who was Alison’s fiancé and was with her two years ago on K2 when she died. There’s friction between David and Lindsey that plays out in the story. Ed Dittrich, known as Ditch, is older and Tyler’s mentor. He’s a very careful and methodical climber and keeps the team on course. The final member of the team is Billy Packer, an irreverent soul who says the most inappropriate things at the wrong time (he’s the comic relief). Tyler’s sister Brynn also joins them. She doesn’t climb but remains in base camp and acts as the trip manager, relaying messages on the radio and watching the weather forecasts.

K2 is located on the border between China and Pakistan in the Karakoram Mountains. The name K2 is derived from the notation used by the Great Trigonometrical Survey of British India, given because it was the second peak measured in the Karakoram Range. Locally, the mountain is called Chogori. Its icy sides are steep and exposed, and it’s prone to heavy storms and avalanches.

Most climbers approach from the Pakistan side, starting in Islamabad, then take a bus ride to the town of Skardu. From there, it’s a 10-day treacherous hike to get to base camp, situated at 18,000 feet. Climbers usually employ anywhere from 50-100 porters to haul in everything they need.

Each team is embedded with a Pakistani Liaison Officer who makes sure they abide by the rules of the permit (no climbing other mountains, no team jumping, no spying, etc.) Over the next 4-5 weeks, climbers haul gear and fix ropes to successive camps up the mountain. To acclimate their bodies to the altitude, this must be done slowly to avoid life-threatening illnesses such as pulmonary or cerebral edema. The climbing season in the Karakorams is from June to August, with most summits occurring in early August.

The difficulty in climbing K2 lies in the fact that it’s prone to frequent and severe storms that make treacherous climbing conditions even more challenging. The number of climbers who have reached the summit is only a small fraction compared to successful summits of Mt. Everest, and proportionally K2 has the second highest fatality rate of all 8000-meter peaks (Annapurna, the 10th highest mountain, has the most.)

Women who have climbed K2

Polish climber Wanda Rutkiewicz was the first woman to climb K2 in 1986, which she accomplished without the use of supplemental oxygen. Unfortunately, that same summer, thirteen climbers died on the mountain, including two other women who had also summited – Liliane Barrard (France) and Julie Tullis (Britain). In 1992, Wanda later disappeared and was presumed dead while climbing Kangchenjunga, the third highest mountain.

There are fourteen mountains that stand above 8000 meters and many climbers have sought to join the Fourteeners Club by summiting each one. Only three women have accomplished it. Edurne Pasabán from Spain was the first in 2010, but she only climbed 13 out of 14 without supplemental oxygen. (The summits of these mountains are at the same altitude at which commercial airlines fly.) Gerlinde Kaltenbrunner from Austria completed her quest of climbing all 14 peaks without supplemental oxygen in 2011 when she finally reached the top of K2 after several failed attempts. Italian Nives Meroi joined the club in 2017.

The first American woman to summit K2 was Vanessa O’Brien in 2017 (she holds dual American-British citizenship).

Obscure Facts I Found While Researching This Book

There’s no perfect food to eat while climbing, and climbers consume all sorts of strange things: butter in bags, lard, but also chocolate, pop tarts, hard liquor and beer.

Mostly the appetite is suppressed at high altitudes and climbers routinely shed up to 25 lbs. on these expeditions.

Climbers melt snow to drink but glacier water is devoid of any nutrients and some female climbers experience problems with menstruation and hair falling out, so it’s recommended to take supplements to avoid this.

Goraks are large birds that resemble ravens and are present at base camp. They also eat the bodies of dead climbers.

Bodies of dead climbers are rarely recovered (it’s far too dangerous) but are eventually pushed down the mountain via avalanches and ground apart from glacier movement. Body parts will frequently turn up between base camp and advanced base camp.

Climbers can die suddenly from the high altitude. Pulmonary edema will fill the lungs with fluid and cerebral edema causes the brain to swell. If symptoms appear to either of these conditions, the affected climber must descend quickly or risk death.