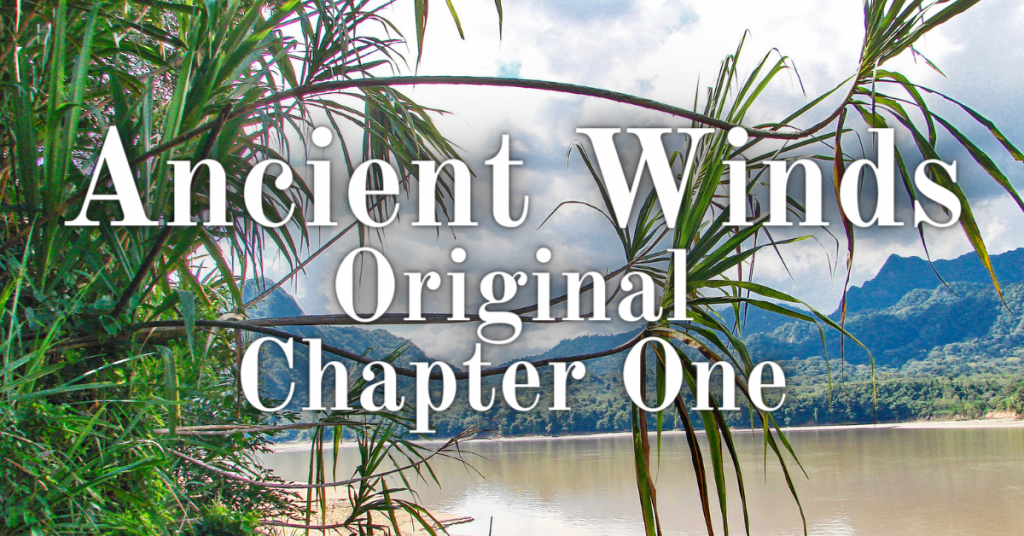 Here's the original Ancient Winds version of Chapter One. For various reasons, I was forced to discard this restaurant scene but I'm still rather fond of it, especially the interaction between Tristan and Brynn. (Note: I hadn't created the Moon Tablet of Ur when I wrote this, so I was calling the artifact the Red Piece.)

Tristan ran a hand through his hair and leaned back in his chair. “Give me something useful, Dimar.”

The Bolivian man sitting across from him smiled back, an insincere gesture that nearly triggered an eye-roll from Tristan. Instead, he released an irritated laugh under his breath. It didn’t escape his notice that he could be an actor in a B-level adventure movie.

Dimar’s eyes gleamed, intense with … what?

“Oh, for fuck’s sake, just tell me what you want so we can get on with this,” Tristan said, waving the waitress over. He ordered another Paceña, the local Bolivian beer. He might as well make the best of it.

Tristan sipped his drink. He grimaced. Might as well be water. “Fifty percent of what?” he asked.

“There is no find. I’m looking for a woman.”

Dimar’s face sagged into a glare. “Don’t mess with me, Dr. Magee. I’m not a pimp. Find a woman like everyone else does, down at the barrio. You’re looking for the Red Piece.”

Tristan schooled his features. “I don’t know what that is.”

Dimar laced his stubby fingers together atop the table, not an easy gesture since the man was short. “Rumors of the piece are almost as abundant as rumors about you.”

Tristan downed what remained of his drink. “I’ll tell you what, Dimar. You give me information about Dr. Caridad and I’ll give you three hundred dollars. American dollars, I might add. Muy Bueno, sie?”

Dimar nodded, his chin jutting as if he thought the offer a good one. Tristan wasn’t fooled.

“That’s very generous, Señor doctor, but I didn’t just fall off the turnip truck.” Dimar arched an eyebrow, as if he were a mother chastising her child. “If the Red Piece truly exists, it will be worth a lot more than three hundred American dollars.”

Tristan smiled and spread his hands. “You gotta help me out here, Dimar. You gotta give me a reason to trust you.”

Dimar paused, apparently thinking it over. Pretending, Tristan knew. He’d found Dimar via his other contact channels, and it was bandied about that Dimar knew the most, trusted the least, and held his customer’s balls in a vice grip to get what he wanted.

While the man played out his role of contemplation, Tristan swung his gaze to the nearby window. A typical Bolivian street scene. Cars, exhaust, the colorful dresses of the local women, Bolivians moving about their day. A tall woman caught his eye. A stylish hat covered her brown hair, and sunglasses had him thinking she might be a movie star. A white shirt and khaki shorts revealed nice legs. Maybe he was in a B-movie after all. She was probably down here scouting for a film. She’d play an intrepid archaeologist, and there could be a rugged mountain man who helps her in the wild. Not unlike himself, he fancied.

“Dr. Caridad was seen in the hills near Rurrenabaque.”

Tristan snapped his attention back to Dimar. What the hell?

This Bolivian ass-wipe could be lying. Only one way to know for sure.

“Can you give me a description of Dr. Caridad?” Tristan asked, his gaze unflinching, his tone even and monotonous.

Dimar sneered. “Uh-uh. You throw down a poker chip now.”

“I’ll give you a ten percent cut of any extraneous pieces my team and I find.”

“No.” Tristan held up his right hand. “Look, Dimar, you have to know the laws of the land. I’ll never be able to keep such a piece even if I did find it. The other stuff will be negligible, and you’ll be able to move it on the black market quite easily.”

Dimar’s lips pinched together. Tristan had finally gotten through to him. South American governments had started coming down on those that moved cultural treasures. If the Red Piece could be found, Tristan knew he’d never be able to keep it a secret. And that was far from his intention anyway.

“Then you may as well give me eighty percent,” Dimar said.

“Bullshit. Stop being such a greedy little bastard. I’ll give you fifty, but I want that description of Caridad, so I know you’re not yanking my chain.” Tristan dragged out that last part, letting Dimar know what he thought of the man’s use of time-worn clichés.

Yep. That was her.

A woman’s voice cut in. “I’m sorry to interrupt.”

It was the B-movie actress. She had removed her sunglasses, but the hat still shadowed her face.

Dimar pointed across the table and with a toothy grin said, “At least you can skip the barrio now.”

Brynn accepted the seat between the two men inside the seedy bar. She removed her hat and set it on the pockmarked table but tucked her small backpack into the chair beside her. While she had her passport and money stashed in a money belt beneath her travel blouse, she didn’t relish having her lip balm, sunscreen, and sugar-free gum snatched by a local thief.

“What can he do you for?” the short Bolivian man said to her while pointing at Dr. Magee.

“This is Dimar,” Dr. Magee said. “You’ll have to excuse the fact that he’s caught in a 1980s American culture time capsule.”

“Pleased to meet you, Mr. Dimar.” Brynn merely nodded instead of extending her hand to shake his. It wasn’t lost on her what kind of men either of them might be. But her contacts had led her here. She also had pepper spray in her pack.

“And what’s your name, pretty American lady?” the Bolivian asked.

“Brynn Galloway.” She grabbed her pack, unzipped it, and retrieved her lip balm, swiftly coating her lips. It was all a ruse. Upon returning the lip balm, she left the bag open. The pepper spray was now within easy reach. She shouldn’t have come here alone.

“Pay him no mind,” Dr. Magee said, the man’s eyes holding her in thrall for a moment. She’d never seen a blue so bright. “Are you looking for local culture to help you research a role?”

Her heated cheeks betrayed that she wasn’t completely immune to the compliment and the rugged good looks of this stranger that she only knew by name. To hide her reaction, she focused on his second statement.

“I’m not an actress. What made you think that?”

He shrugged. And waited.

“I was given your name by a man called Pico Castanos. I’m looking for a woman named Dr. Caridad, and I was told that you might be able to help me.”

Brynn had kept her eyes on Dr. Magee so hadn’t missed the flick of his gaze at Dimar when she said Caridad’s name. She had two older brothers, and no matter how flustered this man’s presence might make her, she knew how to hold her ground, how to hide her emotions. Alec and Tyler had never been able to break her.

“And why do you think I can help you?” Dr. Magee asked.

“They said you were the last person to see her before she left for La Paz. Five days ago.”

Dr. Magee narrowed his eyes ever so slightly, and Brynn could all but feel him scrutinizing her.

“Who exactly have you been talking to?” he asked.

Ever since Brynn had landed in La Paz two days ago, red flags had been popping up left and right. She had no reason to trust this man, or the squirrely Bolivian to her right. But she was worried about Irene, and that overrode everything. She didn’t see any reason to bend the truth. At least, not yet.

Dr. Magee’s eyes widened, and then he laughed, shoving a hand through dark hair that was in desperate need of a haircut. She suspected he’d been down here for a while. “Sweet Georgia apples. You’re an archaeologist.”

“You are an Indiana Jones wannabe.”

“And who the hell, exactly, are you?” she threw back. She’d been told by her contact to find Dr. Magee. That he had been seen speaking with Irene. That he was known around Bolivia for searching for artifacts. But that had been it. Honestly, she’d expected him to be older. And maybe less attractive.

“Have you not heard of the famous Dr. Magee?” Dimar said. “He’s a ruthless relic collector. A man who disappears into the jungle and when everyone assumes he’s dead, he shows up like a ghost. He’s some sort of creature of the night.”

The atmosphere rapidly dove to chilly as Brynn and the man he spoke of stared at Dimar.

Turning her attention back to Dr. Magee, Brynn asked, “So you’re also an archaeologist?”

“Then what are you doing down here?”

He flashed her a grin once again, and the man’s presence skittered along her nerves. Her history with men tended to go in one direction—she liked them a little dangerous, edgy, on the fringe as her college roommates liked to say. That alone flashed a warning beacon in her head. Dr. Tristan Magee was trouble.

“Do you know Dr. Caridad?” she asked, becoming impatient.

“Do you know where she is? I was supposed to meet her when I arrived.”

“So you know where she is?” Brynn asked Dimar. “Is she in danger? Is she hurt?”

“All in good time.” Dimar stood. “I will arrange a driver to take you into the mountains. Meet at the La Paz hotel tomorrow at eight a.m.”

“And he left me with the check,” Dr. Magee muttered.

“Do you think Dr. Caridad is in danger?” Brynn pressed, worried after the exchange with Dimar.

Those mesmerizing blue eyes faltered. “Maybe. That’s why I’m looking for her. But you don’t have to worry. Leave me your phone number, and I’ll contact you when I know something.”

“You’d go off into the jungle with a man you don’t know?” Dr. Magee shook his head in admonishment. “Not a wise decision. Stay here, watch movies in your hotel room, and buy some trinkets at The Witches’ Market.”

“Why do you think Dr. Caridad is in danger?” Brynn pressed.

“Why were you to meet her here?” he countered.

Of course the two had to be related. Of course Dr. Magee was somehow in the thick of it. She had no idea whether he was to be trusted or not. The fact that Irene had asked Brynn to come to Bolivia spoke to something more serious than some artifact she wanted investigated. Irene could have easily photographed it and emailed the photo to Brynn if she had wanted a professional opinion. Brynn couldn’t shake her worry that something had happened to the older woman. A woman who was more than just a mentor. Irene was a friend.

“She wanted me to look at something,” Brynn said.

“And what was that?”

“She didn’t say, except that I needed to see it in person. Would you know what she was talking about?”

“I don’t,” he replied smoothly. Too smoothly.

Brynn retrieved a notebook from her backpack and a pen. She jotted down her cellphone, tore off the sheet, and handed it to Dr. Magee.

“Please let me know when and if you find her, or hear anything at all.”

She stood and shouldered her pack, then snatched her hat and put it on her head. She didn’t bother saying goodbye. Dr. Magee would never call her, of that she was certain. But she wasn’t about to give up on Irene that easily.