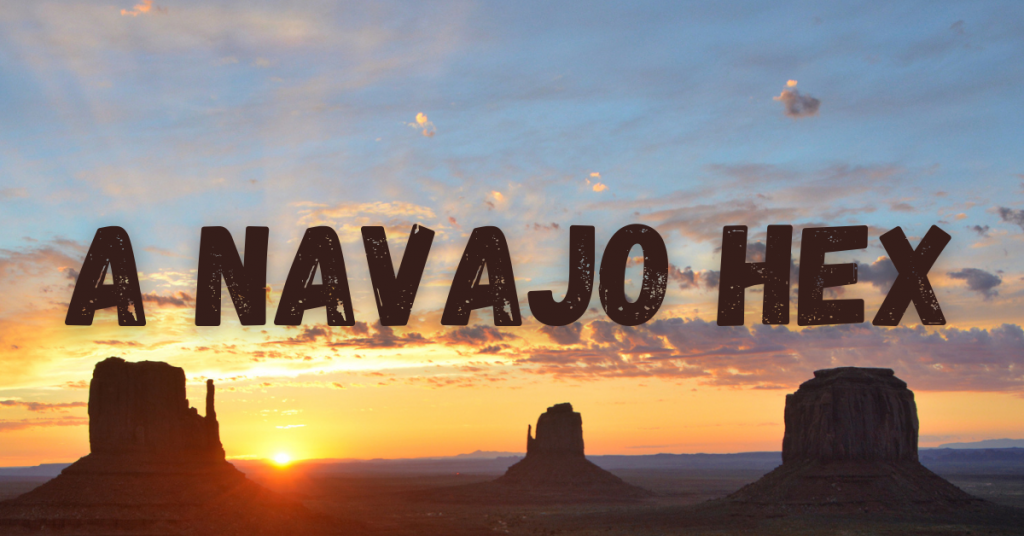 When I was nine years old, I lived on the Navajo Indian Reservation. My dad, who has long had a deep and abiding respect for Native Americans, saw this as a chance to give back with his life, so he took a job as an accountant with an arts and crafts store in Window Rock, Arizona—capital of the Navajo Nation. We obtained a house just across the border in New Mexico, in a small town aptly called “Navajo,” supported by a local sawmill. It was 1975.

One day at one of the stores that employed my father a worker found a Styrofoam cup tucked away on a shelf. Inside were various items that included a torn corner of a $5, $10 and $20 bill. It was immediately clear to those who discovered it that a hex had been placed. Soon thereafter, a medicine man was called. Since it involved all the employees, my dad was allowed, despite being a white man, to participate in the ceremonies conducted.

At the first ritual, the medicine man found a buried pot outside the building at the base of the famous local landmark, the window rock. This was accomplished when his hand trembled over the exact location. On the outside of the pot, stick figures represented the employees, and lightning bolts painted above indicated death by lightning strike. At the time, we were having terrible storms every day. Inside were pieces of coral, turquoise, and silver, and a section of human skull.

At the second ceremony, a bowl filled with some type of tea was passed around to ingest, and then each employee was asked to look into a crystal to identify who had placed the hex. My dad says he saw nothing, but it was generally agreed that the perpetrator was a former employee who had been fired. She was part of a major Navajo clan, and her dismissal had possibly angered the wrong people. But the curse spoke of deeper problems within the Navajo and their way of life. The crafts people—those who made Indian jewelry and the iconic Navajo weavings—were at odds with the administration, which included my dad. There were those who wanted progress, and those who didn’t. At the conclusion of the ceremony, after a sand painting was created, the piece of skull inside the pot was burned. Two female employees reported instant relief from a terrible headache that had plagued them all evening. Back at home, at the same time, my mother said I’d been distraught and crying for hours from pains in my head, which immediately stopped when the bone was destroyed. It seemed family members had also been included in the hex.

My dad never attended the third, and final, observance—the Blessing Way—because we had moved back to Phoenix. He has always joked that the hex was never fully removed. As evidence, he cites various mishaps that occur whenever he and my mother return to the Navajo Reservation: car breakdowns, money stolen, and in one instance missing a critical turnoff because five Indians stood in front of a directional sign.

In my recently re-released standalone historical western novel INTO THE LAND OF SHADOWS, I included the hex in the story.

Digital copies are on sale this week for 99 cents.

It’s been five years since a woman came between Ethan Barstow and his brother, Charley, and it’s high time they buried the hatchet. When Ethan travels to Arizona Territory to make amends, he learns that Charley has abruptly disappeared after breaking more than one heart in town. And an indignant fiancée is hot on his trail.

When Charley Barstow abandons a local girl after getting her pregnant, Kate Kinsella pursues him without a second thought. She’s determined he set things right, and even more determined to end her own engagement to him, a sham from the beginning. But an ill-timed encounter with a group of ruffians lands her in the company of Charley’s brother, Ethan, who suggests they search together.

As Ethan and Kate move deeper INTO THE LAND OF SHADOWS, family tensions and past tragedies threaten to destroy a love neither of them expected.

A sensuous historical western romance set in 1893 Arizona Territory. Into The Land Of Shadows is a stand-alone, full-length novel with paranormal elements.

This book was previously published in 2013 under the same title. While the text and cover have been updated, the story remains the same.

Click to read Chapter One and find buy links.